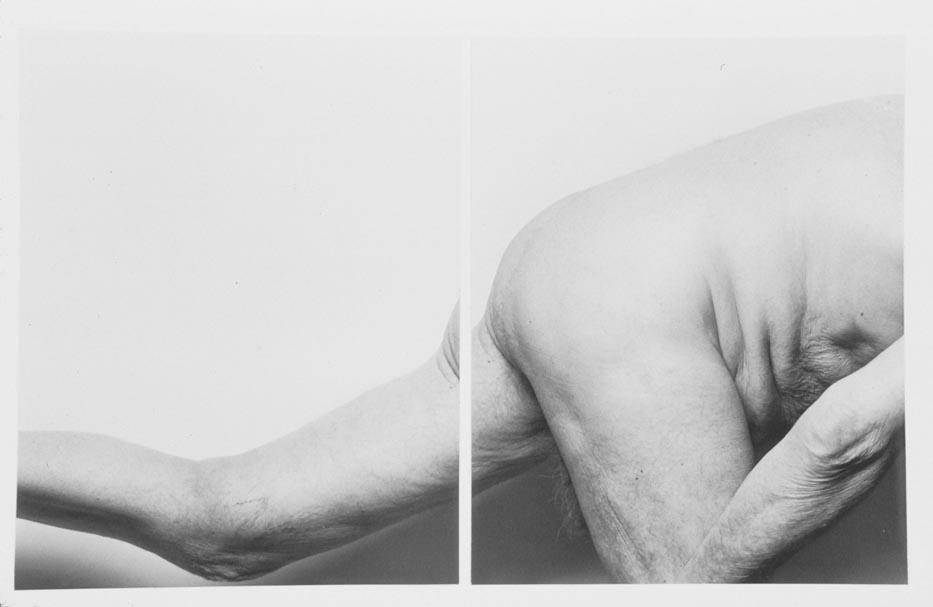 John Coplans was born in 1920, he grew up between London and South Africa. He died in 2003 in New York. Coplans was known as an artist, curator, museum director and art critic. In 1962 he founded the the magazine Artforum with Phil Leider. In the 1980s he began his career in photography, and immediately received widespread acclaim.

Coplans described his work approach 1984 as follows: I remember that in Akron I had taken photographs of myself in the nude with a timer; it has taken me these couple of years, trying this and that subject matter, to look at the nude self-portraits and recognize I had already struck gold and I didn’t know. I daydream. In one dream, I travel down my genes and visit remote ancestors, both male and female. Inspired by these journeys to the past, and the earlier nude self-portraits I had made of my body in Akron, I begin directing an assistant as she takes photographs of my body. To remove all references to my current identity, I leave out my head. I don’t know how it happens, but when I pose for one of these photographs, I become immersed in the past. The experience is akin to Alice falling through the looking glass. I use no props; I pose against a neutral, white background, and before I know what has happened, I am lost in a reverie. I am somewhere else, another person, or a woman in another life. At times, I’m in my youth. Sometimes (but very rarely), it seems that a contemporary event triggers the image, but when I think about it, I realize I have merely relived an episode that happened long before. The process is a strange one. I never know from one moment to the next if this power to time-travel will dry up, or what the next set of photographs will be. In the beginning, I make very few images, no more than nine a year, on the average.