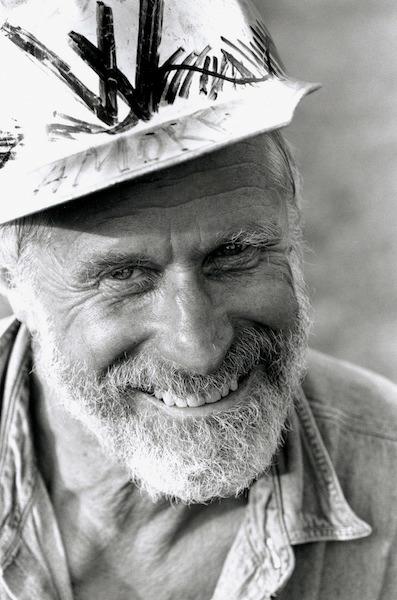 Born Marco Polo di Suvero in Shanghai, China in 1933 to Italian parents, di Suvero’s family immigrated to the United States in 1941. Mark di Suvero studied philosophy and fine art at San Francisco City College, and the University of California in Santa Barbara and Berkeley. Following graduation, he moved to New York City in 1957.

In 1975, di Suvero co-founded the not-for-profit Athena Foundation that provided artists with working space and grants to create large-scale sculptures and brought art to the community at large with the founding of Socrates Sculpture Park in Long Island City.

di Suvero’s numerous exhibitions worldwide include the Sydney Biennale, Sydney (1976); Akira Ikeda Gallery, Yokosuka (1987 and 1991); Valence and Nice, France (1990 and 1991); Institut Valencia d’Aart Modern, Valencia (1994); and citywide expositions in Paris and Venice (1998). In 2005 – 2007, Storm King Art Center in Montainville, New York presented more than 20 of di Suvero’s sculptures in concert with over 80 photographs by Richard Bellamy that had documented the artist’s work. In 2012, the Storm King Art Center staged an outdoor exhibition of his work at Governor’s Island, a 172-acre island located off the coast of Manhattan, and in 2013, SFMOMA partnered with the National Park Serviced and the Golden Gate National Parks Conservancy to present a widespread installation of his works at historic Crissy Field.

The artist’s sculpture may also be found in museum collections, private collections and public sites throughout the world, from the Museum of Modern Art, New York: the Metropolitan Museum of Art, New York; and the Whitney Museum of American Art, New York; to the Moderna Museet, Stockhom; Chalon-sur-Saône, Brest and Valence in France; and Stuttgart and Bonn in Germany. Among his many awards, he was the recipient of the National Endowment for the Arts Grant for Sculpture in 1967, and in 1986, was elected to the American Academy of Arts and Letters. He was honored as a Commandeur d’Ordre des Art et Lettres by the French Government in 1997 and received the National Medal of Honor from President Barack Obama in 2010.