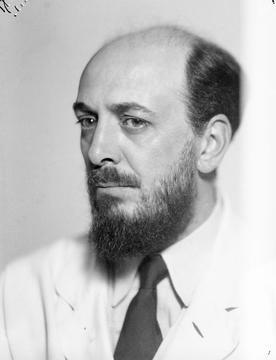 Otto Gustaf Carlsund, born 1897 in Saint Petersburg, was a Swedish painter, curator, and art critic. He passed away in 1948 in Stockholm. Carlsund studied under German artist Richard Müller (1874–1954) in Dresden, at Olso National Academy of the Arts under Norwegian artist Christian Krohg (1852–1925), and at Académie Moderne in Paris under French artist Fernand Léger (1881-1955).

While living in Paris in the 1920s, Carlsund became close friends with artists Piet Mondrian (1872–1944) and Amédée Ozenfant (1886–1966), among others. During these years, Carlsund was introduced to art movements such as Neoplasticism, Purism, and Synthetic Cubism.

At the Stockholm International Exhibition in 1930, Carlsund created a design for the restaurant Lilla Paris, under the direction of Architect Gunnar Asplund (1885–1940). Carlsund spent his last years in Sweden, working as an art publicist.

His work can be found in the collections of Moderna Museet, Stockholm and Norrköpings konstmuseum, Norrköping, Sweden. In 2007–2008, Liljevalch konsthall in Stockholm presented a comprehensive retrospective over the artistry of Carlsund.