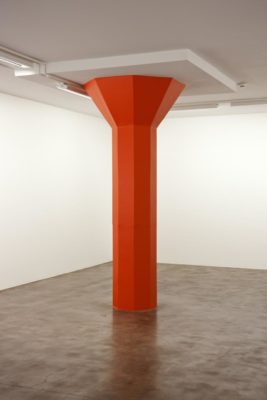 I became aware of the fact that I wanted to increase the “potential” feelings in the spaces, the changes, the possibilities, the hidden scenarios.   Dominique Gonzalez-Foerster

Dominique Gonzalez-Foerster creates environments that engage visitors as both viewers and participants. References to film, literature and art abound throughout her work and are used to collaborate with other artists and to appropriate their work.

Calder Red (Painting) is directly related to Gonzalez-Foerster’s 2008 installation in the Turbine Hall at the Tate Modern. It was a futuristic installation that transformed the cavernous space into a shelter full of bunk beds and books for people seeking refuge from the perpetual rain. Large sculptures were also housed there in an attempt to preserve them from the inclement weather of a fictional London set fifty years in the future. Among the sculptures was a reproduction of Alexander Calder’s enormous stabile Flamingo, the original of which is in the Federal Plaza in Chicago.

Gonzalez-Foerster appreciates the non-verbal aspect of color and its influence. Here she appropriates Calder’s signature vermillion, which has come to be referred to as “Calder red,” to transform an existing column into a freestanding sculpture.

Artworks by Dominique Gonzalez-Foerster in the collection