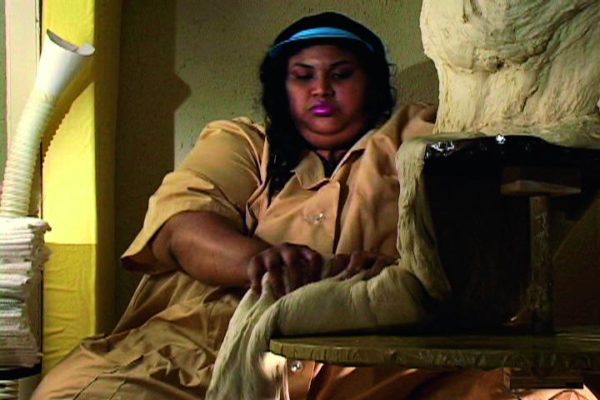 Dough depicts an elaborate process involving tears, air and pollen, in which four uniformed women use a primitive set of machinery designed to make dough rise. The dough is carefully kneaded and transported from chamber to chamber, and the final product eventually emerges as an unremarkable vacuum-packed lump.

In the exhibition Sneeze to squeeze (2013) at Magasin III, the work was installed in a specially-designed viewing room made of low-grade plywood, reached by walking through an extended low-ceilinged corridor. The cheap makeshift aesthetic of this space is echoed in the film itself, where narrow rooms are connected via holes in the floors and walls, creating a sinister cross between highstreet beauty salon and sweatshop.

Through the surreal and disconcerting production methods, and the discrepancy between the input effort and the output value, Dough elaborates on the complex relationship between the women themselves and the product they make. In the semi-industrial setting of this film, the lengths of dough handled by these women seem to take on the characteristics of their own flesh; something to be managed and tended, revered, controlled and pampered. The particular physiques of the women playing the factory workers begin to blend with the product itself, causing product and identity, production and result, to merge, destabilizing the meaning and value of labor. In Dough, the human physicality invested and contained in the process of labor and its structures, is being directly transported into the product, as intimate energies and fluids are excreted by the workers and transformed into a single saleable unit.