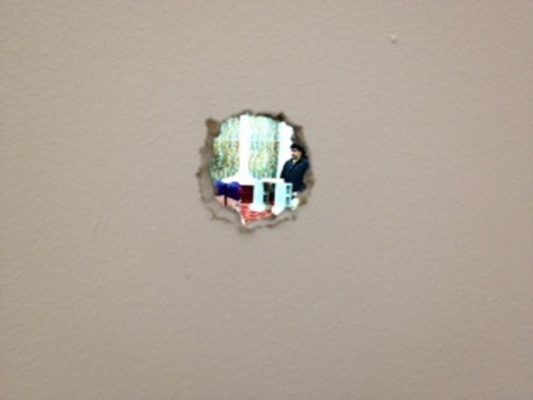 As the sound of Indian music – sarangi, drums and human groans – draws us towards a peephole in the gallery wall, the film Fried Sweat is glimpsed like a surreal, kaleidoscopic scenario unfolding in semi-secrecy. In a small, carpeted space reminiscent of an oriental parlor, a dreamlike assembly of odd characters is gathered to perform various seemingly significant acts: a bodybuilder flexes his muscles to produce sweat that drips into a frying pan and quickly evaporates; a body-contortionist bends into an impossible shape only to implode in a cloud of white dust; and a kneeling man simultaneously chops two planks of wood in half with his bare hands.

The performances that we witness through this peephole may seem like the stuff of “freak-shows” and fairground attractions, where audi- ences were drawn by the sensational abilities and physical attributes of the objectified other. But here, despite the bizarre setup, the power dynamic between watcher and “watched” is not so straightforward. As the scenario unfolds, it resembles a ritual in which the characters begin to generate an ephemeral energy that exudes directly from their bodies, to be harvested for some unknown yet significant purpose beyond our comprehension. The characters seem to share a signifi- cant secret from which we as onlookers are excluded.