Ghost Gu Coming Down the Mountain 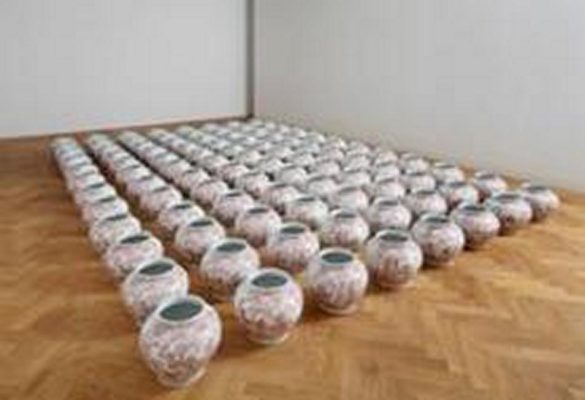 The 96 vases were created in a collaboration between Ai Weiwei and Serge Spitzer, modeled after a vase from the Yuan period (1269– 1368). This rare object was sold a few years ago and became the most expensive Asian artifact ever sold at auction. The vase depicts the historical person Wang Yi (5th century BC) whose nickname was Guiguzi (“Master of the Ghost Valley”). On the vase he is shown in a cart drawn by a tiger and a leopard. The motif is copied from a woodcut dated 1321 AD in which two tigers pull the cart. It is, however, unlikely that Wang Yi had such exotic animals, so one can assume that the woodcut is also a modified version of history.

Working in different parts of the world both Ai Weiwei and Serge Spitzer are interested in the fetish of historical objects and how narratives often tend to go in circles. Every vase in the installation bears a reproduction of a certain section of the motif on the ancient vase. By repeating the motif and arranging the vases in a grid the artists hint at mechanical reproduction and fakes. The work stands in opposition to the traditional experience and valuing of unique artifacts because it is only when all the vases are assembled that they form the complete original motif.