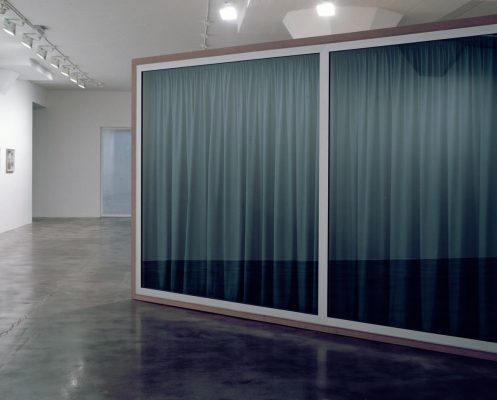 When I moved back from New York in the early 1990s, Annika was one of the very first young Swedish artists that caught my interest. Her visual language is in a class of its own. I made it a point to see everything that she did—I still do. Over the years I’ve gotten to know Annika quite well. Her creativity, her visual language, and her analytical approach allow her to create works that evoke strong associations. For me, it’s a feeling more than anything else.

As an institution, Magasin III has had a particular interest in Annika’s work and supported her practice for many years. Our first acquisition of her work was in 1997 (Försök att hålla ordning på tid och rum I och II (Attempting to deal with time and space I and II), 1997) and we have continued to acquire her work ever since.

At some point, I felt that the time had come to look back and take stock of all she had produced over the nearly 15 years we had known each other. I spoke to Annika and told her that I wanted to do a solo exhibition. The exhibition Ich bin die Ecke aller Raüme in 2008 included more than 50 works, all but three from our collection, and we published an exhibition catalog that also serves as a catalogue raisonné.

Annika had been working with three-dimensionality for a number of years at that time. In some works, this took the form of props that have also appeared in her photographs (such as SPÖKE (GHOST), 2000). In other works, the sculptural element was more architectural or structural—a framing device (such as Esoteric Forensic, 2006). Annika explores the idea of something being both an object and an image at the same time. Her brilliance was just as strong when she left her comfort zone behind the camera, and I knew I wanted to include some of these sculptural works in the exhibition.

We discussed the idea of producing a new work for the exhibition that supported her exploration of three-dimensional work. The result was Ich bin die Ecke aller Raüme – Screen Memory, an installation that is over nine meters long and two and a half meters tall. Its size meant that it had to be constructed on site within the gallery. It consists of a beautifully sewn blue curtain encased in a freestanding box, creating what Annika described as a compressed room. The front is faced with glass, and before the glass could be put into place the curtain had to be draped and positioned perfectly. Annika walked back and forth inspecting and adjusting the folds of fabric, up until the very last moment before the glass was set into place by the team of six installers. Annika has such a strong connection to fabric—evident in this work and also in her photographs of people hiding behind fabric, posing in front of fabric, entangled in fabric and so on.

The work was placed so that it was the first thing visitors saw upon entering the exhibition. Annika and I wanted to create that sense of surprise. It divided the room on the diagonal, and seemed to have its back turned towards the viewer. Ever since we expanded our space in 2002, productions are often placed in the largest gallery on the ground floor as a sort of choreographic finale to an exhibition. Here, the upstairs space was perfect—the work really filled the space in a way it wouldn’t have done downstairs.

Ich bin die Ecke aller Raüme – Screen Memory is in the collection of Magasin III. As I write this, the work has only been shown once.

Artworks by Annika Elisabeth von Hausswolff in the collection

Annika Elisabeth von HausswolffHey Buster! What do you know about desire?1995

Annika Elisabeth von HausswolffOh Mother, What Have You Done #0242019

Annika Elisabeth von HausswolffOh Mother, What Have You Done #0272019

Annika Elisabeth von HausswolffOh Mother, What Have You Done #0092019