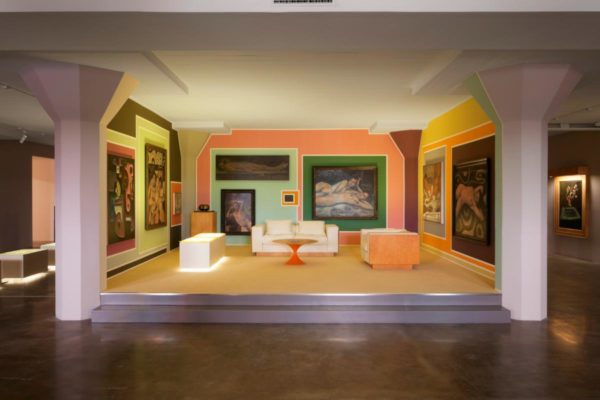 It was David Neuman, Director of Magasin III, who first introduced me to Anton Henning’s art. David had long been interested in his work when the opportunity arose to introduce Anton to the Swedish public through a comprehensive exhibition at Magasin III.

In addition to the excitement of showing an artist who is truly dedicated to painting and who isn’t afraid to work with seemingly outdated thematic trends, it fit our programming well to introduce an artist as yet unknown in Sweden.We were drawn to the fact that Anton doesn’t try to fit in. He is simply passionate about painting. Over time, Anton’s art has broadened in scope, but he is first and foremost a painter.

Anton works with classic art-historical themes in his painting—he depicts portraits, nudes, and landscapes. His work features many references to art history, but he twists and turns the perspective, taking everything one step further to create something completely his own, something difficult to describe in words. Technically, he is near perfection.

In late November 2010, Anton visited Magasin III to look at the exhibition spaces, and at that time we began discussing what form the exhibition would take. As curator for the exhibition, I discussed with Anton my idea of creating a new “salon.” Anton had previously done exhibitions in the form of room-like spaces complete with furniture he had designed himself, different types of wall-to-wall carpeting, walls painted in polychromatic patterns and adorned with his own paintings and sculptures.

At Magasin III, the salon became a room within the exhibition space. It was constructed in a space between four of our pillars and was raised a few decimeters above the actual floor. Visitors could step into the installation and take a seat, observing Anton’s paintings from the armchairs or sofa. They could also view the room from the outside, as a sort of stage where the action of looking at and discussing art became art in itself.

The paintings in Interieur No. 510 come from Anton’s home, which is full of art by himself and many other artists. Anton lives on a large farm in Manker, just outside of Berlin, where I visited him a few times during 2011 and 2012 before Too Much Skin, Taste & Turpentine. In Anton’s studio, we looked through his existing works together and discussed in detail which works should be included in the exhibition.

For a good stretch of time each day, we took a break from working to eat lunch with Anton’s family. Mealtimes seemed to be very important for them. A chef prepared the food, and some of the ingredients came directly from the farm. I see in Anton a lust for life, an artist driven by passion. We had a great deal of fun working together.

Too Much Skin, Taste & Turpentine is the largest exhibition we have had at Magasin III in terms of the number of works. We transported hundreds of works here from Anton’s studio. Receiving that many large boxes, unpacking every piece, and then storing the boxes during the exhibition period was a project in itself.

For the windows opposite the salon, Anton also created the work Stained Glass Window No. 6, composed of four painted plexiglass windows bearing the title of the exhibition: Too Much Skin, Taste & Turpentine. 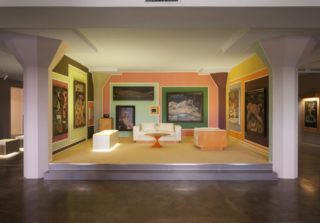 Too Much Skin, Taste & Turpentine2012Read more

Artworks by Anton Henning in the collection

Anton HenningPicasso in Manker No. 42009