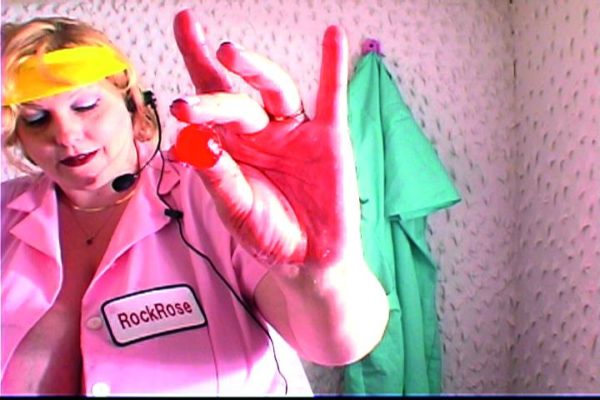 The factory assembly line in Mary’s Cherries consists of a structure of three small units, placed one on top of the other. Each unit contains a female worker who remains connected with the others through a primitive system of tubes and holes. The women, dressed in the bright uniforms of fast-food workers, with their names Mary, Barbara and Rose characteristically embroidered on, produce maraschino cherries in the most astonishing way. Mary’s fast-growing red nails are one of the key ingredients. As these are cut off, crushed, rolled and passed down between the women through the three floors, they gradually turn into glossy and edible cherries.

The women, composed and meticulously made up, bristle with suppressed sensuality. At times they appear purposeful and energized, at others bored and detached. There is a sustained interest in the cheap and kitsch here, as the camera dwells upon each texture and color – the bodies of the women lingered over as physical entities occupying a particular, sensually-charged space within the structure of production. The value of labor is rendered complex, and the human element is made both more absurd and more “real”. The atmosphere of this production line is not alienating, but intimate and connected, as the human aspect of structures and systems of production appear far more significant than the manufactured product.