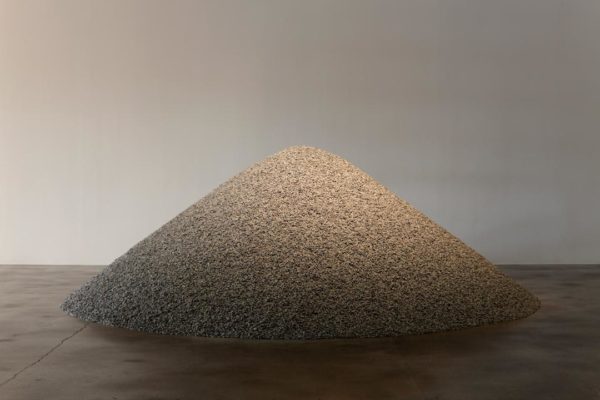 A pile of sunflower seeds. A graphic black and white installation with seemingly identical seeds that we all recognize. However, on closer inspection, it becomes clear that the seeds are inedible and made of porcelain. Sunflower Seeds provokes thoughts regarding the ‘Made in China’ phenomenon and the mass production that permeates a large part of our society. In 2010 Ai Weiwei captured the imagination of the international art world when he filled the entire floor of the Turbine Hall of Tate Modern in London with many millions of these individually made sunflower seeds. The work that was shown at Magasin III is a rendition of this installation, which exists in several different versions (500 kg, 5 tons, 10 tons).

China has a long history of producing porcelain of the highest quality. The city Jingdezhen in southeastern China is known the world over for its fine porcelain and was the court supplier for many centuries. Ai Weiwei turned to the town’s inhabitants and commissioned them to produce the sunflower seeds for his work using traditional methods. A total of 1600 people were actively engaged for two and a half years in making millions of sunflower seeds. Every porcelain seed was hand painted with the characteristic black and white pattern. The work is a commentary on China’s status in the world as synonymous with mass production, and Ai Weiwei emphasizes the individual as an essential part of the masses.