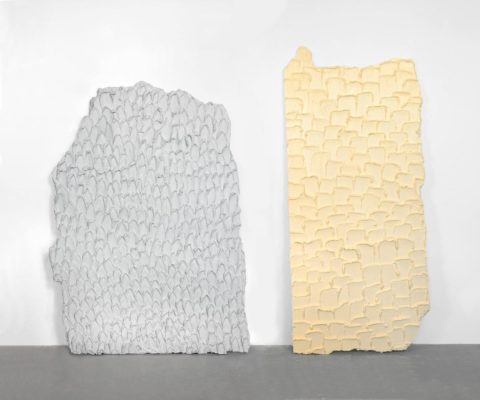 The first time I saw the work of Mika Rottenberg was in New York at the 2008 Whitney Biennial. It was Cheese (2007), a sculptural installation with video projections showing a fictional narrative that revolves around six long-haired sisters who produce cheese with the help of their flowing locks and various mystic rituals. It was simultaneously one of the strangest and most appealing artworks I had ever seen. As I began to learn more about Mika Rottenberg, I found her to be one of the most interesting and unprecedented artists of our time.

In the spring of 2012 I got in touch with her to create an exhibition for Magasin III. During the course of the next year, we met up in Nottingham, Stockholm, and several times in New York before her month-long stay in Stockholm for the installation of the works. In February 2013, the exhibition Sneeze to Squeeze opened for our visitors to experience.

Mika produced several new works for the Magasin III exhibition: Tsss and Texture 1-6, a group of six new sculptures. The sculptures are reminiscent of the frosting that tops American cupcakes and are her first purely object-based works. Four of them (two sculpture pairs) are now a part of the Magasin III collection.

In an email dated October 21, 2012, Mika wrote:
“Regarding the ‘texture sculptures’ – very excited about making them, I think they will be a great addition for the show – been experimenting and thinking about all the options, and after considering and looking at the tests we did, it is clear to me that they should all be made from plastic. the end result will be 6 to 9 slabs of different textures and colors, broken fragments that echo some of the architectural elements seen in the videos.”

I had an idea of what to expect, since I had seen some raw casts during an earlier visit to New York. The slabs were all different shapes and sizes with surfaces of varying textures in white plastic. The next time I returned to Brooklyn, I took an enormous freight elevator up in an old warehouse building where Katrin Altekamp, who often helps Mika to build structures and prototypes for film recordings, has a studio with a fantastic view of Manhattan. The sculptures were leaning against the same wall as last time, but now they were in bright tones of yellow, pink, green, and blue pastel and neon green. Mika walked back and forth between the sculptures with her daughter Mila in a stroller. She then took hold of a sponge dipped in yellow paint and dabbed at the peaks on the light green sculpture. We talked about different color combinations and feelings attached to them. The smallest sculpture had started out bright blue, then bright green, and while I was there Mika started experimenting with details in white. A few weeks later, the crates of artwork arrived in Stockholm and Mika and I opened them together. The pink sculpture now had yellow peaks too, and the smallest sculpture had been painted with so many different colors that it looked like a detail from a Monet painting.

In the exhibition, we leaned the six sculptures against one of the walls in the large ground floor gallery, much as they had appeared in the studio in Brooklyn. They were flanked by Cheese, the work I had first seen at the Whitney Biennial, and Squeeze with its new addition Tsss that is now part of the collection of Magasin III. The sneezing men in Sneeze formed the final element of this motley assembly so characteristic of Mika’s practice. Experiencing the work of Mika Rottenberg is truly a visual and conceptual cacophony with a strange logic that somehow seems absurdly self-evident.