Time and a Half 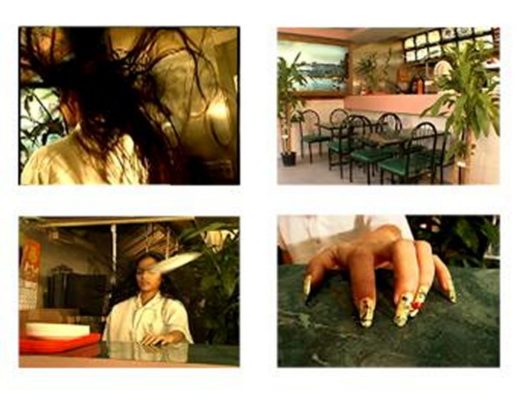 Time and a Half represents a mundane moment in a worker’s life that is both frozen and extended. In a Chinese restaurant, a waitress working overtime raps her long, painted finger nails on the counter. In the dead time between serving customers, where she is physically present but mentally absent, an otherworldly moment opens up. As if an unknown force descends on the scene, all sensory perception becomes exaggerated – both prolonged and slowed down. The wind from the table-top fan takes on the properties of a real breeze as the hair of the waitress lifts and moves, fanning out into an organic shape.

The highly contrived and artificial – the faux exoticism of the restaurant, the painted nails of the waitress and the artificial breeze of the fan, transforms into something supernatural. As the sound of her nails intensifies, the polystyrene plates begin to take off from their pile, one by one. Elements that appear remote and lifeless – a photo of a Chinese seascape, the palm trees painted on her nails – are brought closer and come alive. Time and a Half references the “ghosts” of another place, a place of origin that by degrees of removal has been rendered artificial. In the faux exoticism of the Chinese restaurant, the reality of labor, the hope, divisions and enforced roles that economic migration entails, are alluded to without being explicitly defined.