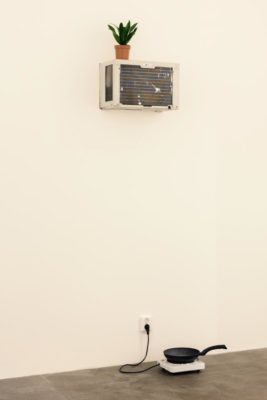 “funny – looking at your note, i like the way the new piece is written- ‘Tssss’ maybe that should be the title, let me think about it.”
Mika in an e-mail on December 16, 2012.

Mika Rottenberg’s process often begins with a fascination for a sound, a smell, or a taste. Working with Mika was a journey into a truly unique way of seeing and experiencing the world. With her peculiar, light-hearted and absurd narratives she creates artworks that are serious and thought-provoking but also liberatingly funny.

Mika came to Stockholm in September 2012 for an on-site visit. Just two months earlier she had given birth to her first child, a girl named Mila. With Mila on her hip and with the support of her partner Sean and her mother-in-law, Mika was impressively engaged and focused. After a few days we had decided on the selection of works and a layout placing each work in a specific way to be discovered while walking through the exhibition.

Later that year, during one of my trips to New York, Mika and I met up one evening in a rather shabby restaurant to talk through a long to-do list. As we were sharing an insalata caprese Mika suddenly came up with the idea of making an extension to the installation Squeeze and thus also creating a whole new work of its own. On a sheet of paper she drew the air-conditioning unit with a small plant placed on top that is fixed to the outer wall of the room in which Squeeze is screened. But she added a frying pan on a hot plate and a few drops and wrote “tsss tsss.” She explained to me how she imagined condensed water from the air conditioning unit would drip into the sizzling frying pan, skittling around and evaporating just as fast as it landed.

The sketch was transformed into an artwork for the exhibition at Magasin III. The biggest challenge was to make the air conditioning unit leak and drip at the right pace. To make the hissing noise more notable the sound was played from a speaker hidden inside the unit. Today Tsss (2013) can be shown both as a part of and as a special twist to Squeeze, as well as an autonomous work of its own.