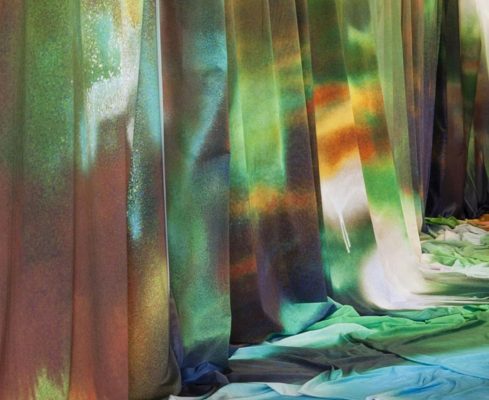 When the exhibition wizz eyelashes was created, we were going through a period in which we were focused on renewing our identity. As part of the process of developing a new graphic identity for the institution, we examined its history. In connection with this, the idea was born to have an exhibition featuring artists from different periods of the museum’s exhibition history. We wanted the works we included to be shown in the same place as they were originally exhibited in order to further emphasize the different periods side-by-side. wizz eyelashes began in the fact that a part of our exhibition history, in the form of murals by Sol LeWitt and Katharina Grosse, was preserved under several layers of paint in the room that for many years was the sole exhibition space of Magasin III and that in recent years has served to show works from the collection.

We also talked about producing a new work in front of our building. We had just started thinking about whose works we would want to see outdoors when we received a newsletter with photos of a public art work by Katharina Grosse that had just been installed in Brooklyn. When we contacted her to investigate the possibility of a new collaboration, we had two requests. The first was to create a new work inspired by her exhibition Infinite Logic Conference, which was shown at Magasin III in 2004, and the second was to create a new work for the site in front of Magasin III. Fortunately, she agreed. The latter project was gradually developed into a sort of satellite installation that was shown at Nybroplan, almost three miles (5 km) from the museum for five days in September of 2014 and then in a large storage space in a warehouse nearby Magasin III in Frihamnen for eleven weeks.

The work that Katharina created for the exhibition space at Magasin III consisted of nine large pieces of different fabrics draped across two walls and covering parts of the floor. Printed on the fabric was the motif of the part of the large site-specific painting Katharina had created in the same place ten years earlier. The work became a sort of fragmentary image of the original work, a so-called “ghost piece” in Katharina’s own words.

The production of the textile work came with a whole slew of technical challenges. Originally, Katharina wanted it to be made of silk, but this was simply not economically feasible (because the work was going to require so much cloth). Instead, we had to be creative in the choice of material and sent numerous fabric samples between the artists studio in Berlin and Magasin III. The choice finally fell on five different types of fabrics.

The printing process was carried out using photographs that were taken for the exhibition catalogue in 2004. These photos were not ideal for the new purpose and therefore required an enormous amount of editing. When the photo editing was done, an equally large job followed as we fit the motif on the different pieces of cloth that were going to be draped on two walls. During the installation itself, a great deal of attention had to be paid to draping the cloth so that the motif would make sense.

Just like the painting in 2004, the new work stretched out over the floor. As a result, there was a physical overlap with Walter De Maria’s Large Rod Series: Circle/Rectangle 13, which we chose to show in the same place as it was for his exhibition in 1988 (the first ever solo exhibition at Magasin III). We installed De Maria’s steel rods directly on Grosse’s fabric installation. Many voices in the media, as well as a number of visitors, were incredibly bothered by this physical contact between the works. We were told, for example, that we had destroyed Walter De Maria’s work (we hadn’t caused the work any physical harm, of course) as well as that what we had done was blasphemy.

We hadn’t created this overlap for fun or out of esthetic reasons. Behind the decision was a carefully conceived idea about overlapping time and exhibition history, and an understanding of Walter De Maria’s work as much more than just aesthetically pleasing. In our research, we looked at such things as how similar works by De Maria had been presented before. We found that the artist himself had installed one of his Rod Series works on a richly-patterned Afghan rug for the exhibition Large Rod Series: Circles/Rectangles 1984-1986 at Xavier Fourcade Gallery in New York City in 1986. In other words, his works do not have to be installed on a monochromatic foundation.

The other work that Katharina created for the exhibition, a painting in the form of six large spheres (balloons measuring 5-5.5 meters in diameter), was first intended to be displayed in front of Magasin III. But when we found out Katharina’s intended scale, our exhibition technician Christopher Garney created large models made of tarpaulin that we tested in different places, among them the roof of one of the lower sections of the Magasin III building. During our first visit to Katharina’s studio in connection with the project, we worked with this rooftop in mind as the technical investigating was simultaneously happening at Magasin III. Christopher examined how these giant balloons could be anchored in their intended places and turned to a meteorologist to evaluate Frihamnen’s weather conditions. The meteorologist came to the conclusion that in the fall, we could expect very strong winds at that location. We realized that the balloons and their brackets wouldn’t hold against the powerful autumn winds, so we had to go back to the drawing board.

Instead, we developed the idea to show the work in a completely different place, where as many people as possible would have the opportunity to enjoy it and might consequently discover Magasin III. It also fit well considering the work with our new graphic identity and that we wanted to reach out with it. Nybroplan felt like a good alternative, since it is located centrally in Stockholm and because Magasin III is only ten minutes away on bus 76.

Using pictures, maps, and a model of Nybroplan, Katharina created what she describes as a three-dimensional painting. It was comprised of six air-filled balloons made of PVC, covered with canvas in different colors. In a large airplane hangar outside Berlin, Katharina spray-painted the balloons before they were deflated and sent to Stockholm. Early in the morning on September 18, 2014, the work was installed. It was a Wednesday, and dense fog lay over Nybroplan. People who bicycled past on their way to work were noticeably amazed by Katharina’s work. Over the next five days, thousands of people stopped, looked, took photographs, and asked questions.

Afterwards, the work was moved to an empty warehouse at Magasin 6 in Frihamnen where it could be viewed for the remainder of the fall season. When the enormous spheres arrived at Magasin 6, where the ceilings are seven meters tall, they almost looked larger than they had at Nybroplan. Visitors who came to Magasin III that season seemed to enjoy the suspense of using a map to find their way through Frihamnen to the large warehouse where Katharina’s colorful work revealed itself.

Our work with wizz eyelashes and the production of Katharina’s work for the exhibition contained the element that makes processes like this so exciting—how changeable things are. Although Katharina had created large, painted balloons before, they were never intended for an outdoor environment, so that aspect was a bit experimental. The explosive response created by the installation of Katharina’s textile work alongside De Maria’s Large Rod Series: Circle/Rectangle 13 surprised us, but it contributed to interesting conversations about curating and the exhibition as a format. It became a reminder that art truly can stir up feelings—which is a good thing!

Artworks by Katharina Grosse in the collection