Christine Ödlund, “Stress Call of the Stinging Nettle”. Concert and talk at Dome of Visions, KTH

Christine Ödlund has previously spent time at KTH Royal Institute of Technology at the Department of Organic Chemistry, where she studied plants, and especially stinging nettles, communicating with each other. This resulted in, among other things, the watercolor Stress Call of the Stinging Nettle (2010), which is also a musical score. This work will be shown in the exhibition at Magasin III.

On February 26, Dome of Visions presents both a concert where students from the Royal College of Music in Stockholm will interpret the score of Christine Ödlund’s work Stress Call of the Stinging Nettle, as well as a talk between Christine Ödlund and Anna-Karin Borg Karlsson, professor of organic chemistry at KTH.

The evening is organized by the Dome of Visions in collaboration with Magasin III and the Royal College of Music. 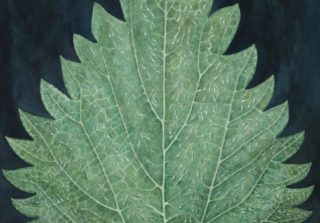