If you want more out of life than just to eat, sleep, die…
The term ‘work’ has become a buzzword that is frequently cited in the Swedish media, politics and current affairs.

Curator Tessa Praun discusses this important topic with film director Gabriela Pichler. Through art and film they examine the different ways in which ‘work’ is depicted across contemporary art forms. Why is it such a heated subject? How does the concept of ‘work’ differ in artist Mika Rottenberg’s imagery and Gabriela Pichler’s critically acclaimed feature film Eat Sleep Die (2012)?

Gabriela Pichler lives and works in Gothenburg, Sweden. Her first feature film Eat Sleep Die premiered at the Venice Film Festival in 2012, where it won the Audience Award. The film has since received several international awards including four Swedish Guldbagge awards for Best Film, Best Direction, Best Screenplay and Best Actress. Pichler is considered one of Sweden’s most interesting new filmmakers, celebrated for both her distinctive storytelling and an unconventional method of working with mostly amateur actors.

About the film: Eat Sleep Die tells the story of the brazen 20-year-old tomboy Raša (Nermina Lukač). A Balkan immigrant, Raša lives with her father in Skåne and works at the local vegetable processing plant. When the factory makes cutbacks, Raša loses her job and is forced to navigate the ineffective Swedish unemployment system. 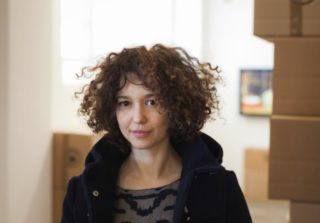