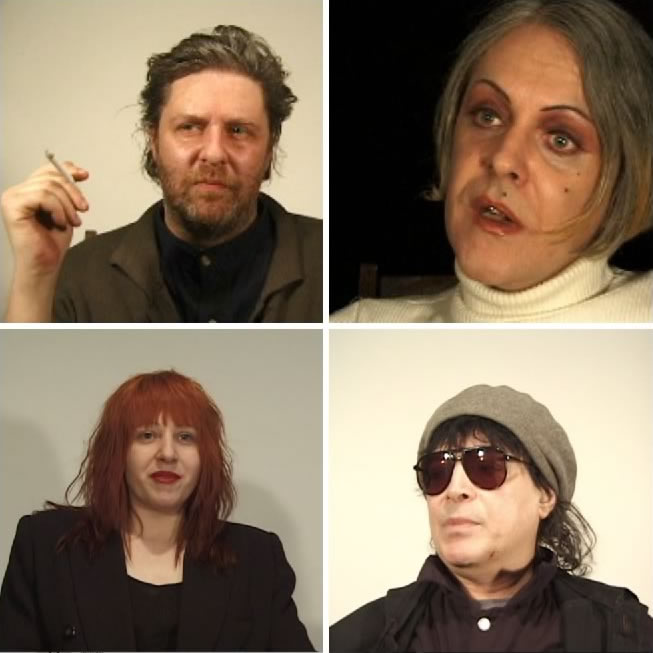 These conversations, filmed between 1997 – 2001, were originally included as one element of Oursler and Mike Kelley’s multimedia installation The Poetics Project. These films reveal fascinating insights and anecdotes from some of the most influential figures in the experimental rock and art underground of the 1970s and ’80s.

Screening program
The program runs daily from 11.10am. Each film is screened twice or three times during these days.

Alan Vega
Alan Vega, one half of the influential pre-punk synthesizer/drum machine duo Suicide (with Martin Rev), helped pioneer electronic music in the early 1970s. Vega, who began his career in New York as an artist known for light sculptures, also ran an art space that was a meeting ground for some of the most important artists in the underground New York art and music scenes.

Arto Lindsay
Arto Lindsay made his name with the New York noise-rock group DNA, whose inclusion on Brian Eno’s genre-defining 1978 compilation No New York sealed their legend as no wave pioneers. Since then he has been a fixture of the New York downtown scene, playing with the Lounge Lizards and the Ambitious Lovers, and producing or collaborating with artists such as Laurie Anderson, Ikue Mori, Caetano Velosa, and DJ Spooky.

Dan Graham
A legendary figure in contemporary art, Dan Graham has helped to redefine the role of the artist today. From his early magazine pieces, photography, films and video works, to his critical writings and architecture projects, Graham has pushed the boundaries of what culture is and how it functions. He is also an enthusiastic fan and observer of rock culture and its rituals, and has worked with many of the important figures in the New York music scene.

David Byrne
David Byrne was the leader of the Talking Heads, the enormously influential band that rose to international fame after emerging from the downtown New York New Wave/punk scene that revolved around CBGB in the late 1970’s. His subsequent solo career has included recording, performing, producing, and directing and scoring films. Byrne has also recently returned to his roots as a visual artist, making work that explores the boundaries between external and internal space.

Glenn Branca
Glenn Branca emerged from New York’s no-wave scene in the late 1970s, composing and performing radical guitar music with his bands The Static and Theoretical Girls. A rock iconoclast and avant-garde composer, he began orchestrating experimental symphonies of massed guitars and percussion for the Glenn Branca Ensemble in the 1980s, and continues to compose and perform.

John Cale
One of the more respected figures in rock music, John Cale has made a career of drawing on both avant-garde and pop approaches, most famously in the Velvet Underground, the hugely influential band that he co-founded with Lou Reed in 1965. His distinctive touch as a writer and producer has led to collaborations with luminaries ranging from Terry Riley and LaMonte Young to Iggy Pop and Patti Smith.

Kim Gordon
Kim Gordon is bass player and vocalist for the experimental rock group Sonic Youth, a visual artist, and the founder of the clothing line X-girl. She has also played in the bands The Supreme Indifference, Free Kitten, and The Lucky Sperms. Her feminist lyrics, which address issues such as rape, eating disorders, and gender stereotypes, and her support of women musicians, have influenced a new generation of artists and musicians.

Laurie Anderson
Laurie Anderson successfully works across cultural lines and disciplines, fusing a conceptual art framework with a firm grasp of popular aesthetics. In addition to exhibitions at word-class venues, she has produced commercial albums (garnering a hit single along the way), released a feature film, and created pieces for radio. Her large-scale theatrical productions, such as 1983’s United States, synthesize visual effects, performance, music, and video.

Lydia Lunch
Lydia Lunch has been an important figure in New York’s downtown art and music scene since the late 1970s, when she led such seminal no-wave bands as Teenage Jesus & the Jerks and 8 Eyed Spy. Since then she has been widely acclaimed for her writing, spoken word projects, and performances in experimental films.

Thurston Moore
Thurston Moore got his start as a musician in the late 1970s, playing in Glenn Branca’s massed guitar ensembles, and went on to found the experimental rock group Sonic Youth, which continues to record today. A central figure in the New York music community, Moore’s activities include the promotion of younger artists (including, famously, Nirvana), the management of his own record label, and a vigorous writing career that encompasses poetry as well as criticism.

Tony Conrad
Since the 1960s, Tony Conrad’s experimental work has helped define the contours of minimalism, both in music and in film. Even as films such as The Flicker upped the structuralist ante, he was crafting a body of musical work that stands as a major achievement of experimental composition, from long-duration performances with LaMonte Young and John Cale as The Theater of Eternal Music to his more pop-oriented work with the German art-rock band Faust.