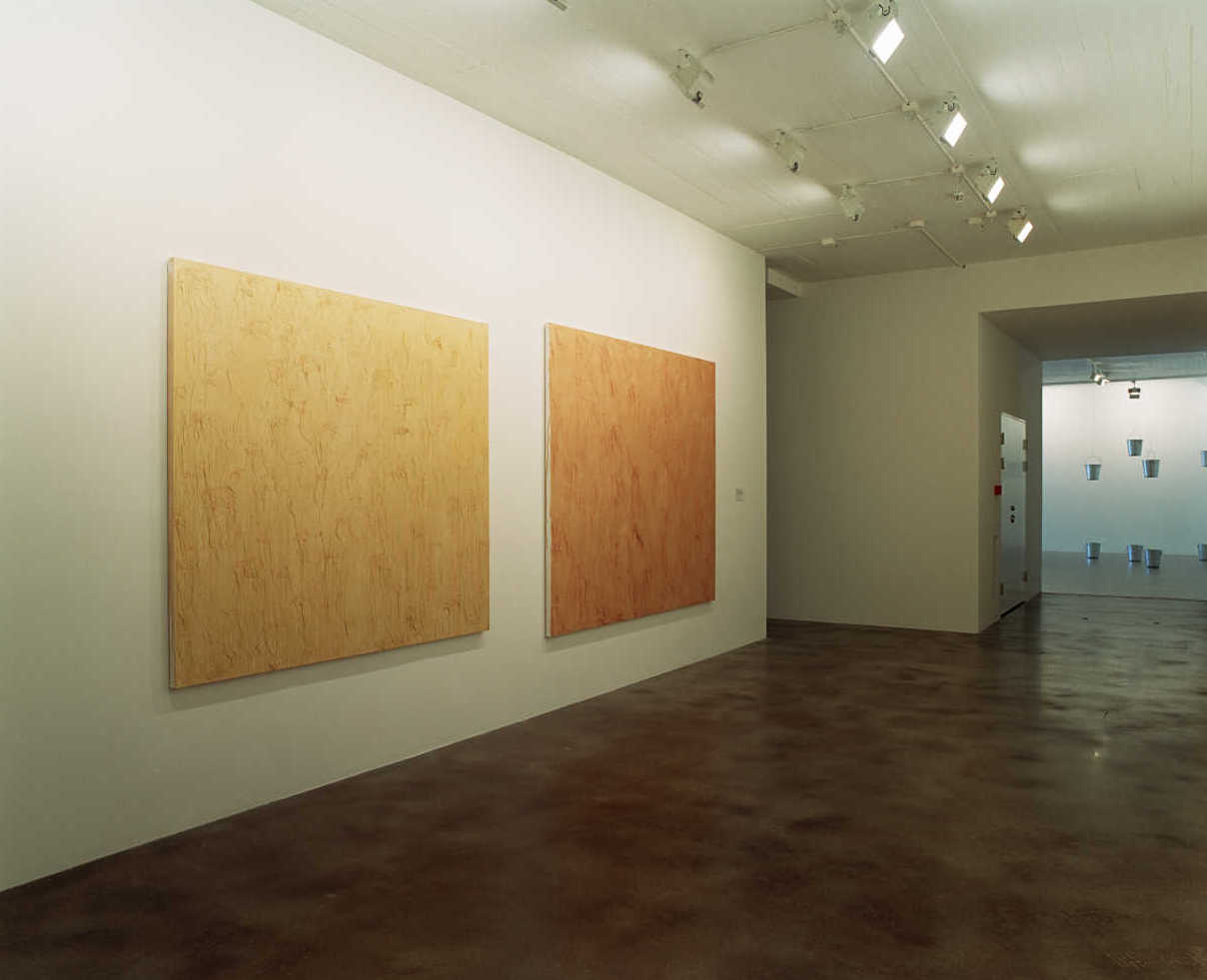 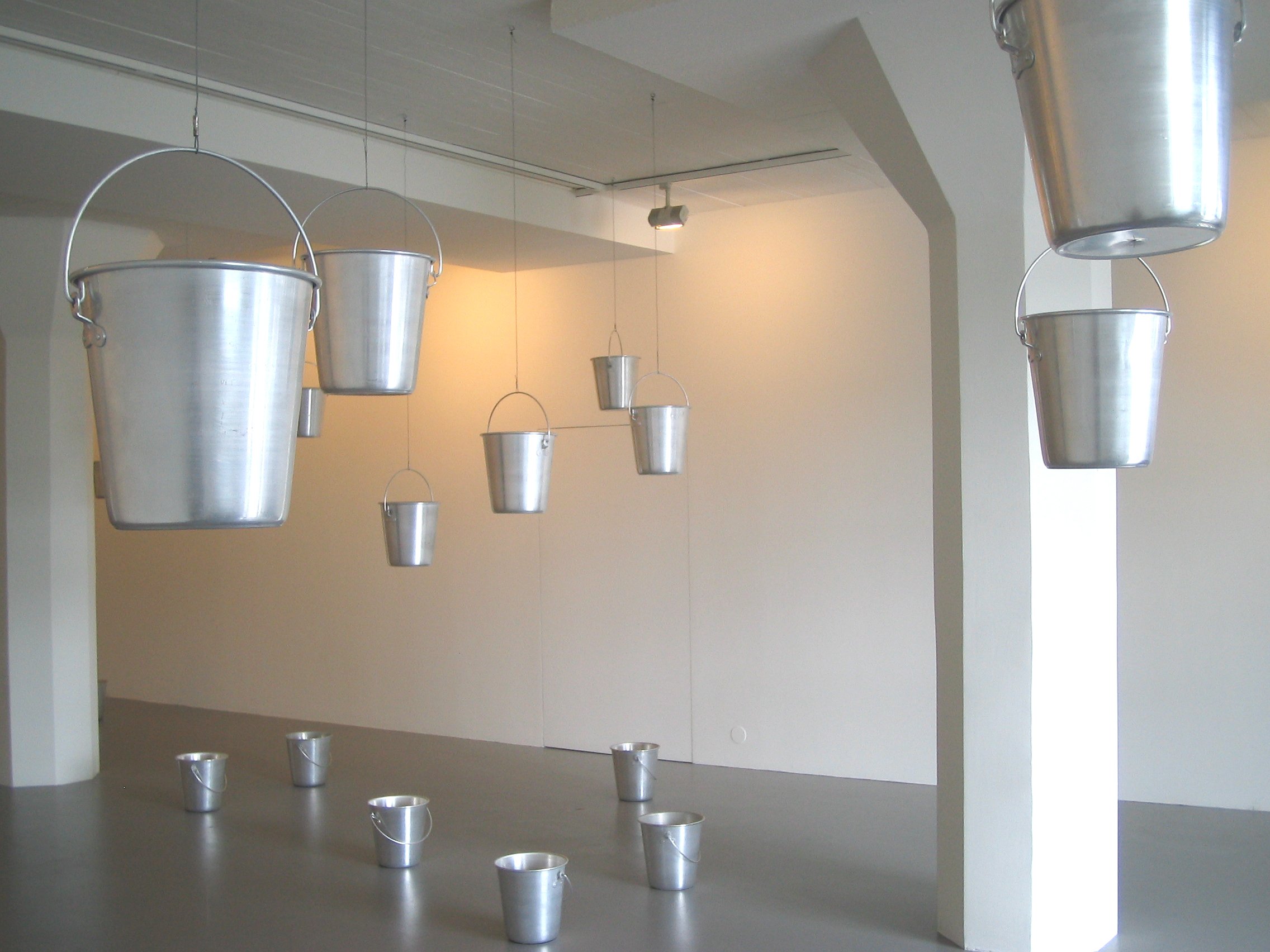 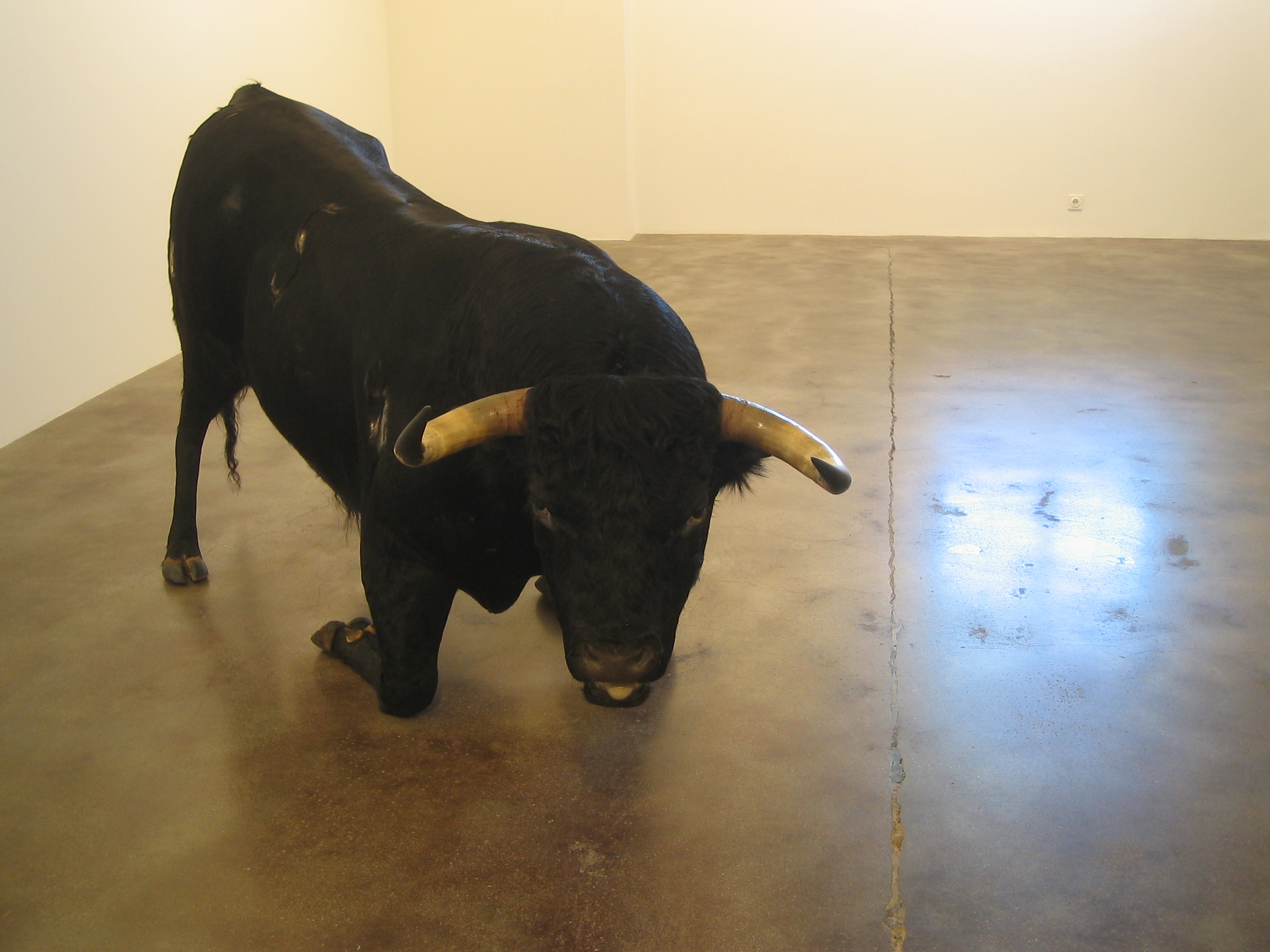 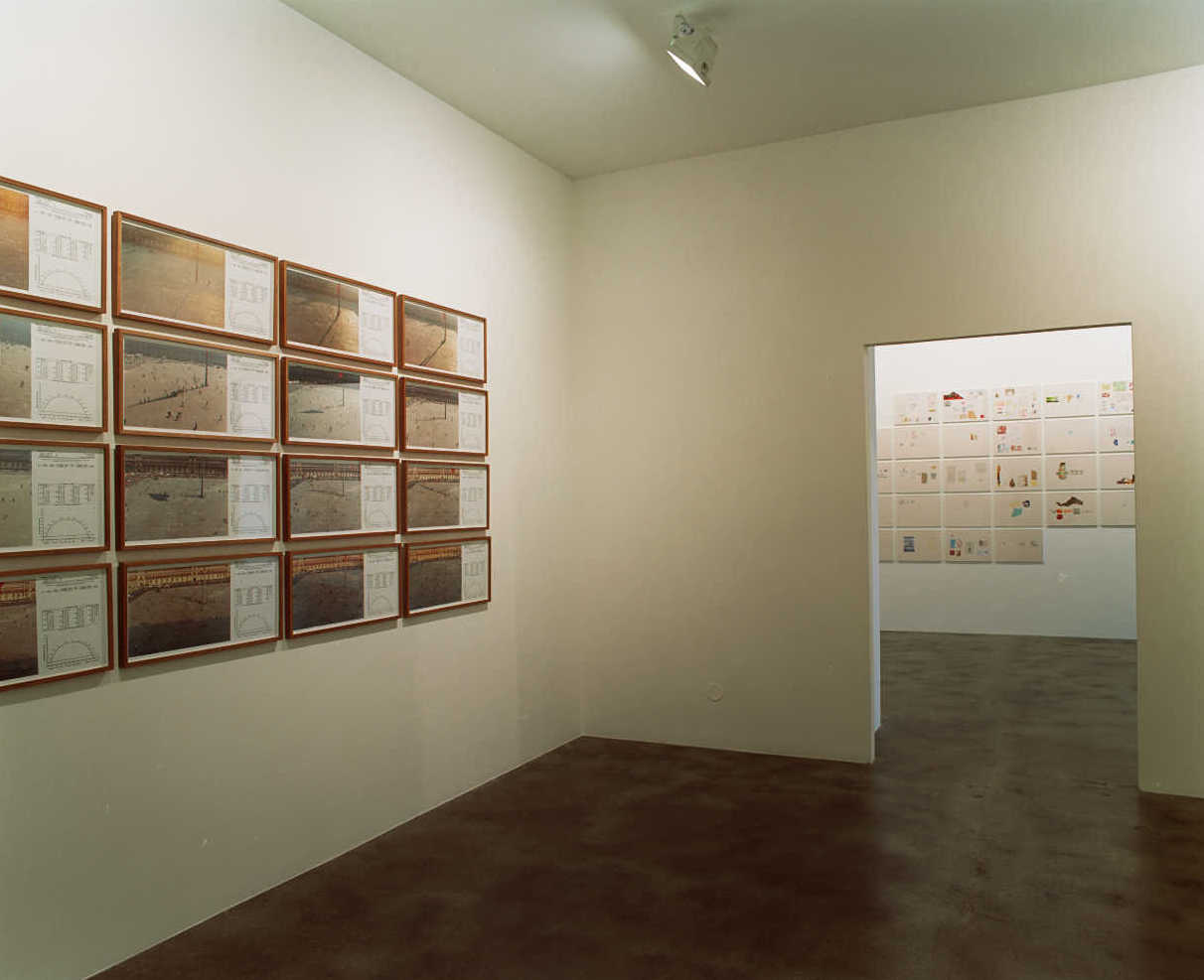 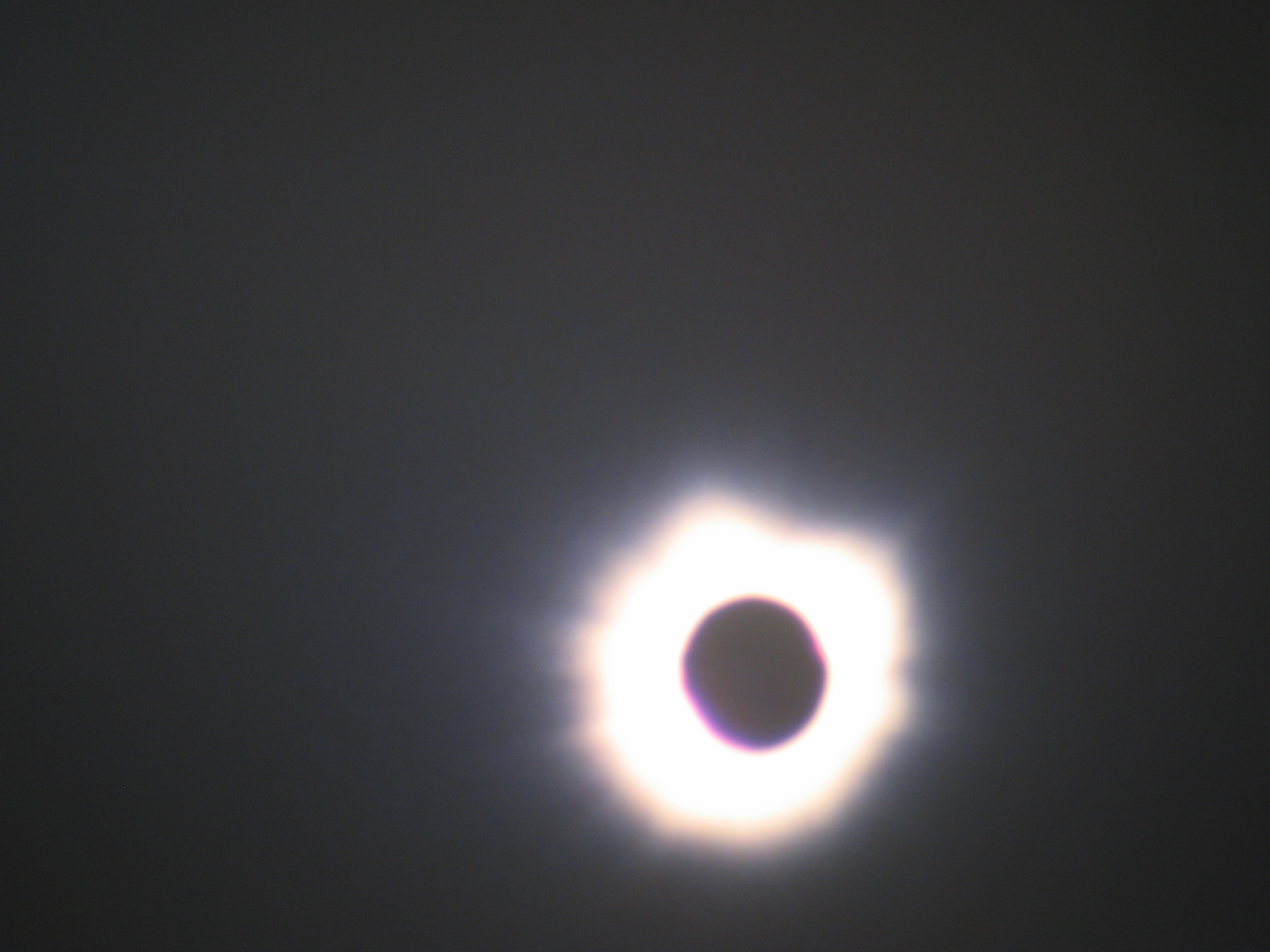 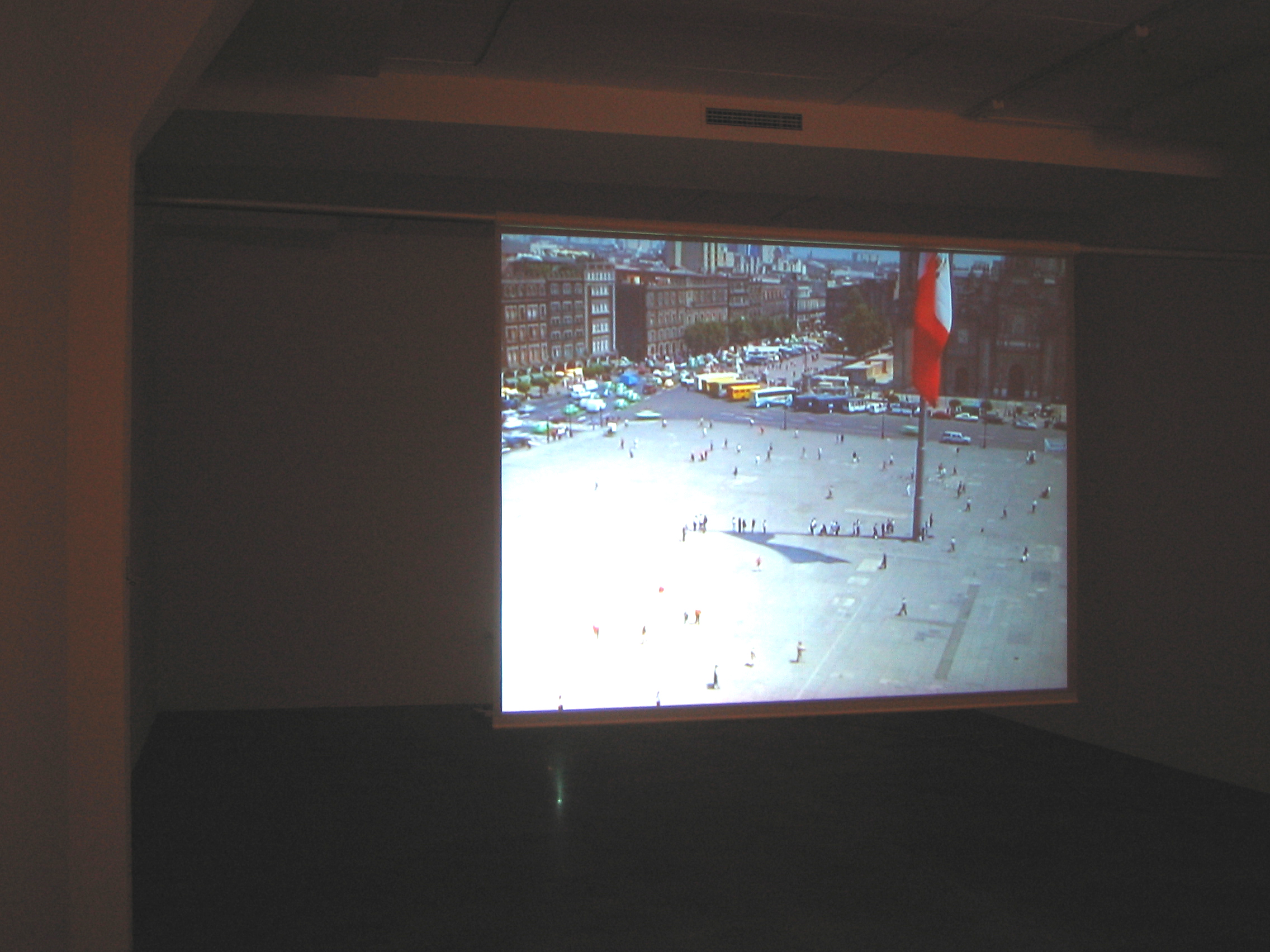 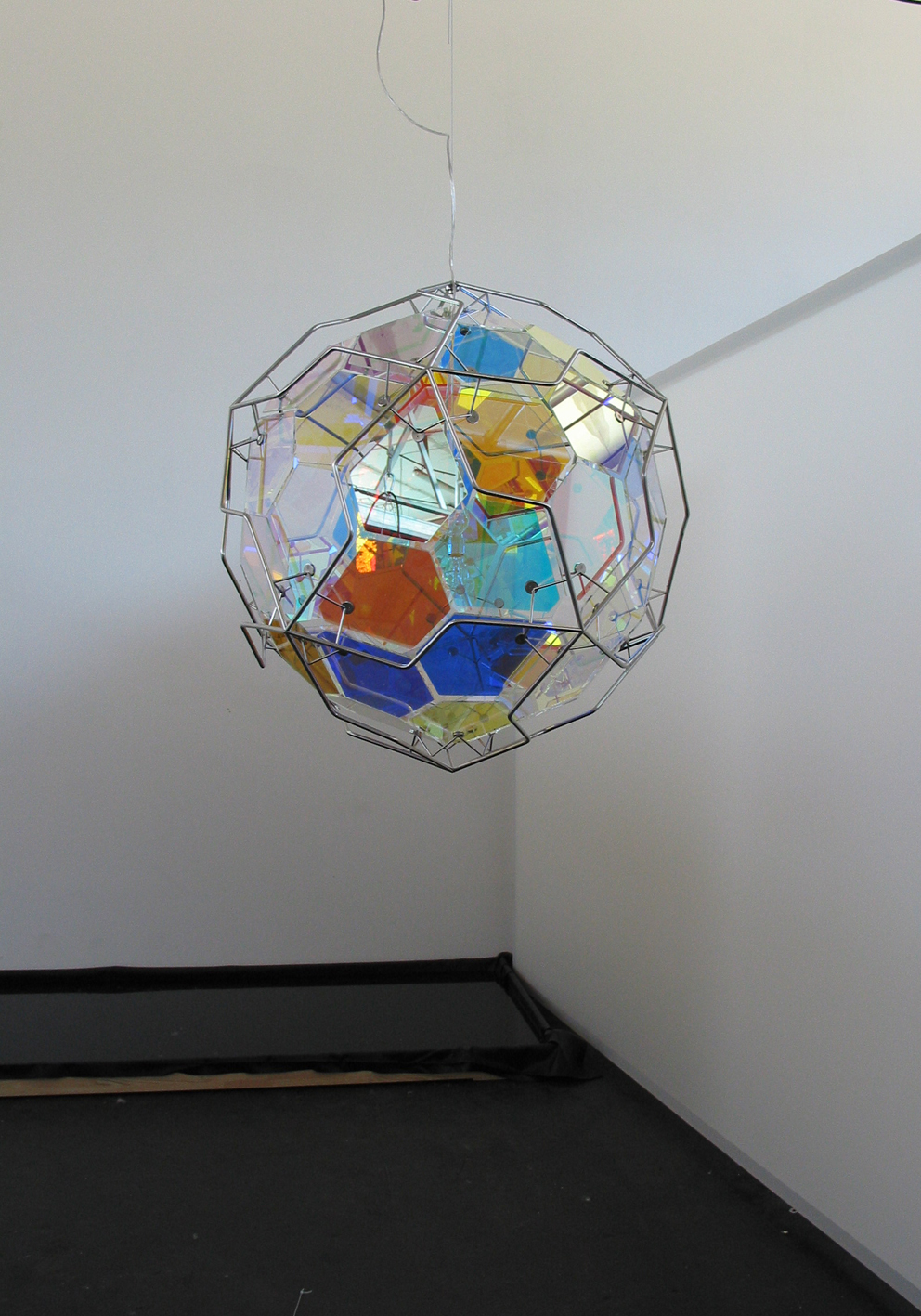 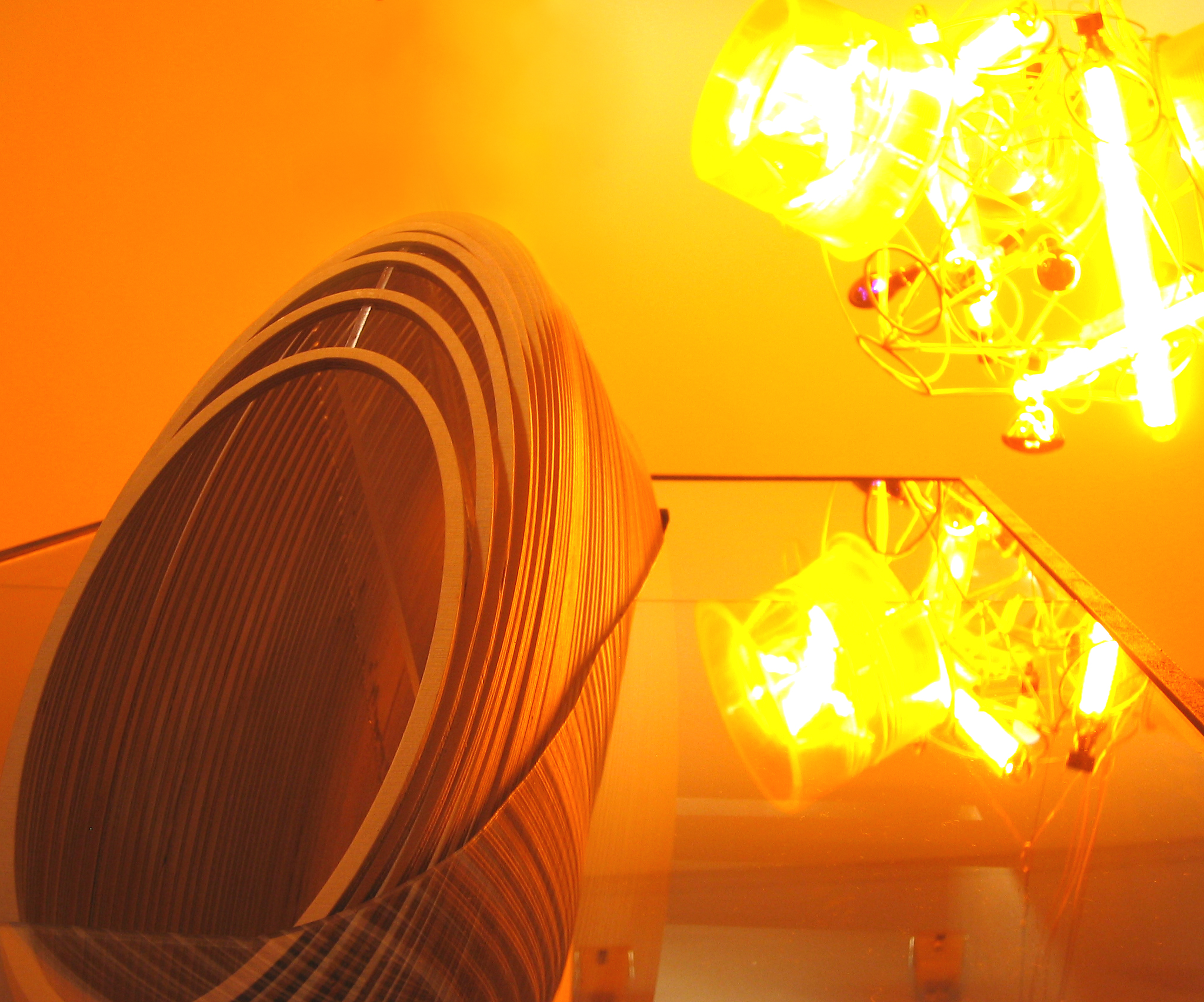 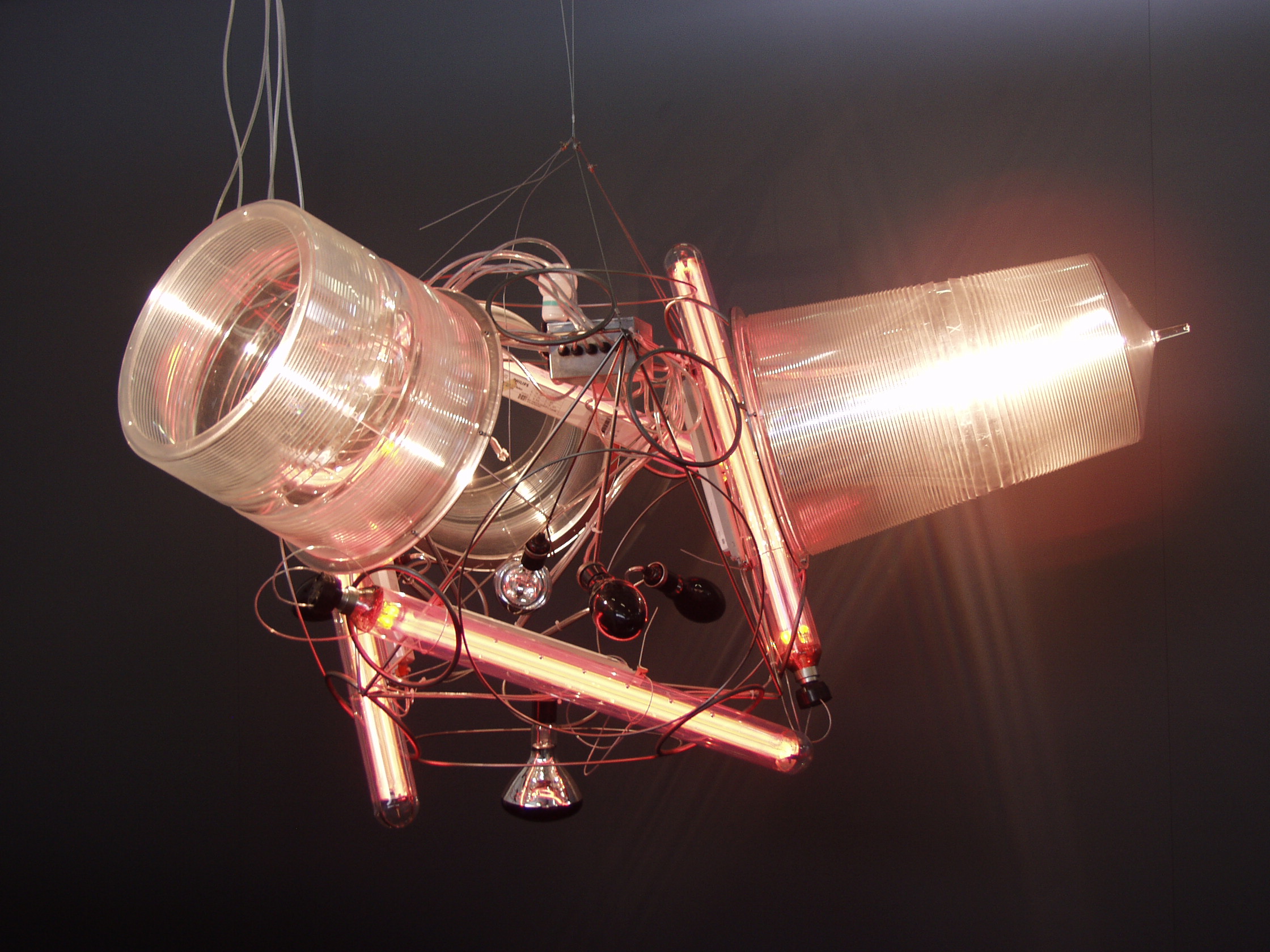 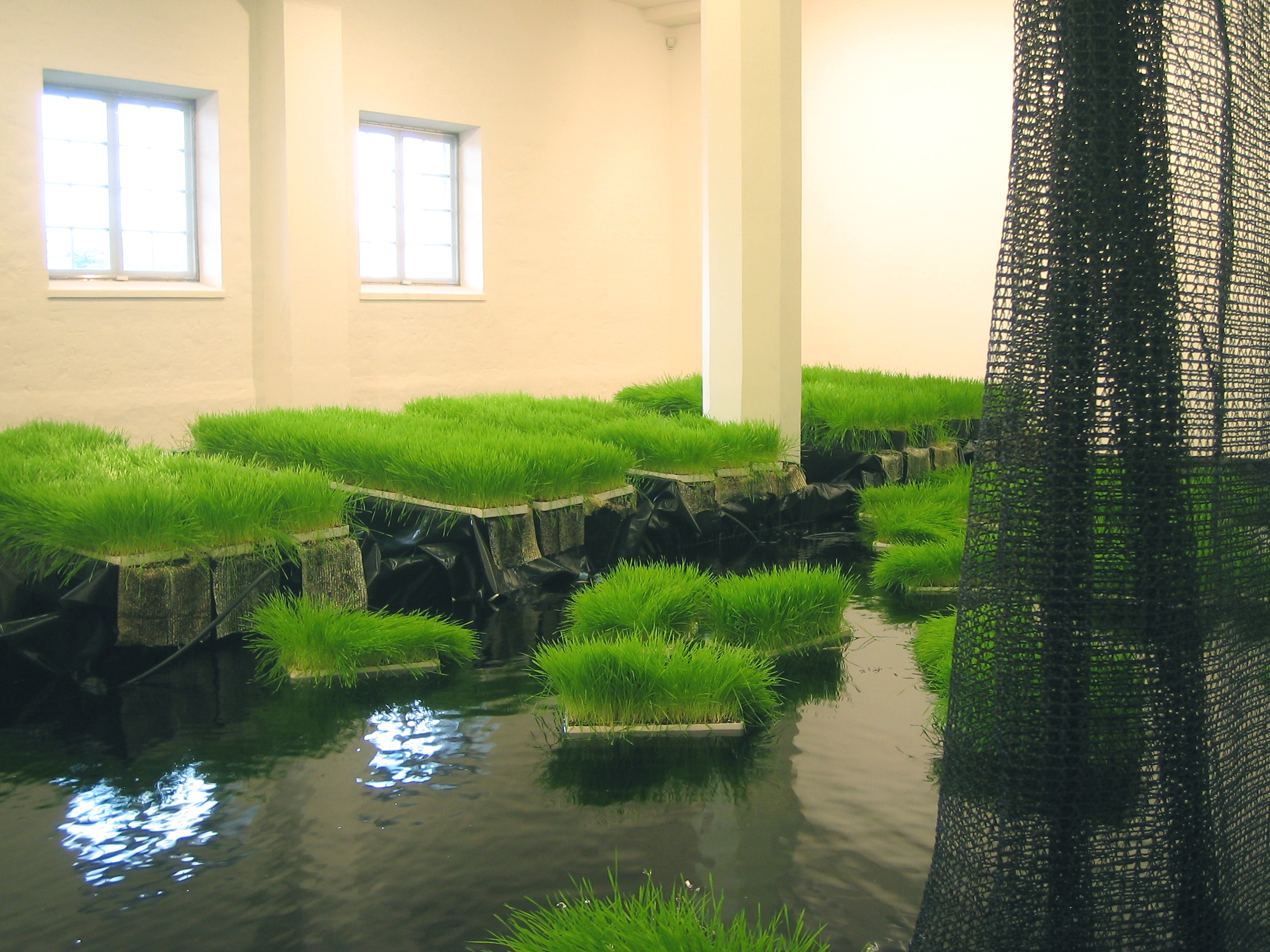 Born 1966 in Esslingen/Neckar, lives and works in Frankfurt am Main.
Tobias Rehberger has been exploring the processes and context in which aesthetic values emerge. He works in between the areas of design, fashion and architecture and conceives the artist’s role as that of a catalyst of people’s desires.

His installation from 2003, 7 ends of the world consists of 222 lamps ordered in 7 groups. It belongs to a group of works that use light and digital technology to connect a local situation to one or several other locations around the globe. As planet Earth circles the sun, different groups are activated. Recreating the light in distant cities such as Kyoto and Las Vegas, they shine with increasing strength and then slowly fade away. The entire room thus functions as a complicated solar clock that displays the constellation of the two heavenly bodies. The work is a poly-rhythmic light machine, at once cosmic and very down-to-earth. The viewer who traverses the room walks from time zone to time zone.

Born 1963 in Cairo, lives and works in New York.
Drawing, sculpture, installations and garden design are an integral part of her work and are pervaded by the same aesthetic and ideological concerns. Despite the differences between her Islamic upbringing and the models of behavior that apply in Western culture, Ghada Amer alludes to universal problems, such as love, sexual desire and the domination of women, which are prevalent in different cultures.

In the paintings she has specifically created for the exhibition Here Comes the Sun, Ghada Amer is referring to an erotic dream she had long ago. The feeling of fulfillment was so strong that she saw herself melting in an ocean of gold. “I was drowning in an immense pond of water and it was all gold. I was trying to get out to breathe and then sinking again. The golden water was very thick and I was falling down deeper and deeper.” This dream was a clear metaphor of the sexual embrace where the consciousness of the ego is lost and where darkness and enlightenment become one.

Born 1968 in Seville, lives and works in Madrid.
Pilar Albarracín’s productions have focused on the analysis of dominant narratives and, specifically, on the clichés that represent Andalusian identity. Folklore and popular traditions, food rituals, religious myths, and women’s role in the distribution of power or collective festivals such as bullfighting, are critically reflected in the mirror of her reflections.

In the collective ceremony of bullfighting, for example, the sacrifice of the bull and the exhilaration of the festival are associated with offerings to the sun, with unproductive rituals and with the astonishment and the hecatomb of daring to look death in the face. Bullfighting is a mirror and a ceremony, a power game that shows that the sacrifice is, par excellence, an attitude in the face of death since, as Bataille says, “the movement it consists of is a violence which demands proof that death exists. “Tartero” (2004) is a separate sculpture of a stuffed wild bull that presents the animal, the symbol of power and energy, defeated, kneeling and humiliated, but lifting its horns and its gaze in a final, proud and tragic attitude of defiance before death. With this intense and fleeting gesture, the bull proves its nobility in front of the sun while facing the great defeat: the defeat wherein it doesn’t matter how death comes, it always comes.

Jeroen de Rijke was born 1970 in Brouwershaven, and Willem de Rooij was born 1969 in Beverwijk. Both artists work and live in Amsterdam.
For the past ten years, this artistic duo has built a close collaboration around the medium of 16mm and 35mm film, while at the same time considering their practice to be similar to painting or sculpture. In their approach, the cinema is reduced to what is most visibly cinematic about it, which is to say, what is most immediately pictorial and sculptural. Bantar Gebang, (2000), takes Indonesia as its landscape and as its context a vast garbage dump near Jakarta. The film unfolds at dawn, just as the light is suddenly rising. The viewer is invited to contemplate the subtle and rapid changes in luminosity on this unlikely and phlegmatic set.

Born 1959 in Antwerp, lives and works in Mexico D.F.
The work, Zocalo (1999), documents a flag that stands at the center of the huge square in Mexico City. It casts a shadow that attracts the people who try to escape the relentless light that falls onto the plaza. Thus, a large solar clock is created with human figures as an element. This is an artwork about the Mexican sun, about the movement of planet Earth through space, and about social life in the Mexican capital.

In a quote from 1993 Francis Alÿs’describes his thoughts and ways of working “…I spend a lot of time walking around the city… The initial concept for a project often emerges during a walk. As an artist, my position is akin to that of a passer-by constantly trying to situate myself in a moving environment. My work is a succession of notes and guides. The invention of a language goes together with the invention of a city. Each of my interventions is another fragment of the story that I am inventing, of the city that I am mapping.”

Born 1967 in Belo Horizonte, where she currently lives and works.
Besides echoing the rains and the gutters of buildings in Belo Horizonte, Neuenschwander’s hometown, the installation Chove Chuva (2002) explores systems of containment and circulation. In it, metal buckets hang from the ceiling and rest on the floor of a room. They are filled with water, but small holes in their bottoms allow the water to drop slowly from one bucket to another. For this process of dripping and transfer to continue, someone must participate in the work by pouring the water that falls into the lower buckets back into the hanging ones. The work alludes to the passage of time, to recycling, and, indirectly, to sustainable development, a maintenance of balance that might also be a metaphor for the emotions.

Rivane Neuenschwander has repeatedly worked with time and organiziation of it. For Found Calendar (2002), the artist used bits of paper from ads, tickets, and newspaper articles numbered, from one to thirty-one – and placed them in order under to construct her own calendars. Neuenschwander has as well created calendars based on expiration dates.

Born 1941, lives and works in Ein Shemer.
Avital Geva is a prominent figure in the discourse of conceptual Israeli art. Toward the late 1970s Geva time and again criticized what he found to be the all-too verbal aspect characterizing the statements of the people around him, and the pressing need for more practical, real action. Geva thus ceased his activity in the art world, and in 1977 set up an educational-experimental Greenhouse in his kibbutz, Ein Shemer.

Work in the Greenhouse is generally performed in collaboration with changing teams of scientists and with youth, mainly those with difficulties assimilating into the official educational systems. Geva states “through the sense of partaking in the agricultural processes explored, I have opened up to the notion of seasonal time that I connect to a type of spiral, a cycle that also moves forward.”

In the work Biofilters and Communities (2005) Geva reveals his notion of time’s cyclic appearance through the growing wheat that is presented in its different ages: from it sprouting up to its withering moments. The botanical world in the work is expanded through the presence of the greenish plankton layer, those microorganisms which grow in water under the plans. The microorganisms, that almost invisible factor in Geva’s biosphere functions as its “bio-filter” that purifies the water and thus improves the co-existence between the different participants: the fish, the plants and their encompassing surrounding.

The artist describes his work further “My ability to take part in the agricultural and biological processes in the Greenhouse involves a quasi-naive concentration on them as the only way to study them. Thus I find new types of aesthetics, language, in other words – art that is revealed through practice…The research I am currently interested pertains to the plankton layer, a plant nourished by the process of photosynthesis. The nets that are hanged on top of the pond become a potential colony the moment they will be washed by water. That algae inhere the potent appearance of such places in which time has left its mark; places that embrace tiny life forms, (green) evidence of the sun’s constant presence and the traces of time that has already passed, and that is passing right now, from here onward… “

Born 1965 in Cantebury, lives and works in Berlin and London.
Through her films, drawings, photographs, and texts, the British artist Tacita Dean has developed a body of work anchored in a singular relationship with time and space. In Dean’s work, these two elements are never really separated or isolated from each other but rather closely linked, the indissoluble coordinates of her universe.

Dean is constantly seeking to reveal the site of the experience of duration, to create a complicity between space-time and its physical context. For Here Comes the Sun the artist presents two films that perfectly demonstrate this approach. In the film Banewl (1999), shot on a farm on the coast of Cornwall in England, Dean patiently records the before, during, and after of a solar eclipse. The slowness of the film, whose topic is waiting, reflects the rhythm of the natural physical events being captured by the camera. Due to capricious and overcast weather, the true subject of the film ultimately disappears, inviting the viewer to focus on the landscape of the countryside in its simplest activities.

In the same space, the artist screens Diamond Ring (2002), also shot during the solar eclipse, just as the sun was beginning to appear behind the moon, creating the effect of a ring of light. It is the fleetingness of the instant but also the ‘supernatural’ aspect of the event that seems to attract the artist’s gaze. Dean decodes almost imperceptible changes and invisible phenomena just as she deciphers the great natural raging and immensity of the sea.

Born 1967 in Copenhagen, lives and works in Berlin.
Olafur Eliasson investigates the limits of human perception. In a number of works he has created situations to remind us that we are actively perceptive subjects. Our own position in the surroundings and our capacity to give meaning to what we see contributes to the experience of what we see. In a series of work he has returned to the sun and sun light as central metaphors.

One of his earliest works, Beauty (1993) was an artificial rainbow made by a simple lamp and hose and in Your Sun Machine (1997) he created a ‘cosmological’ installation with the simplest of means (a hole in the roof). The Weather Project a recent work (2003/2004) – was a representation of the sun and sky that dominated the expanse of the Turbine Hall at Tate Modern, London.

For Magasin 3 Eliasson has created a number of new works that together form a Stockholm Solar Lab.

Tobias Rehberger7 ends of the world2003