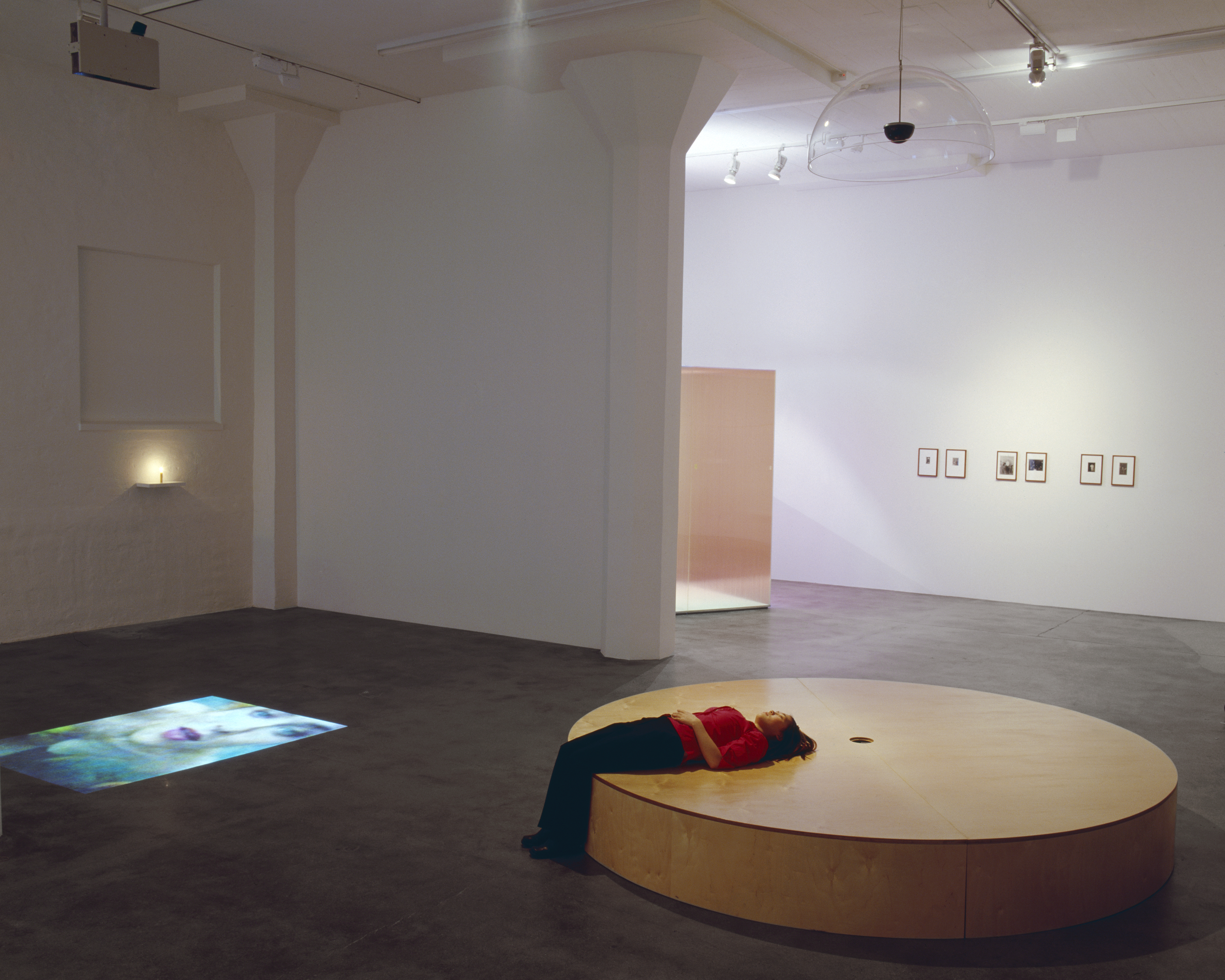 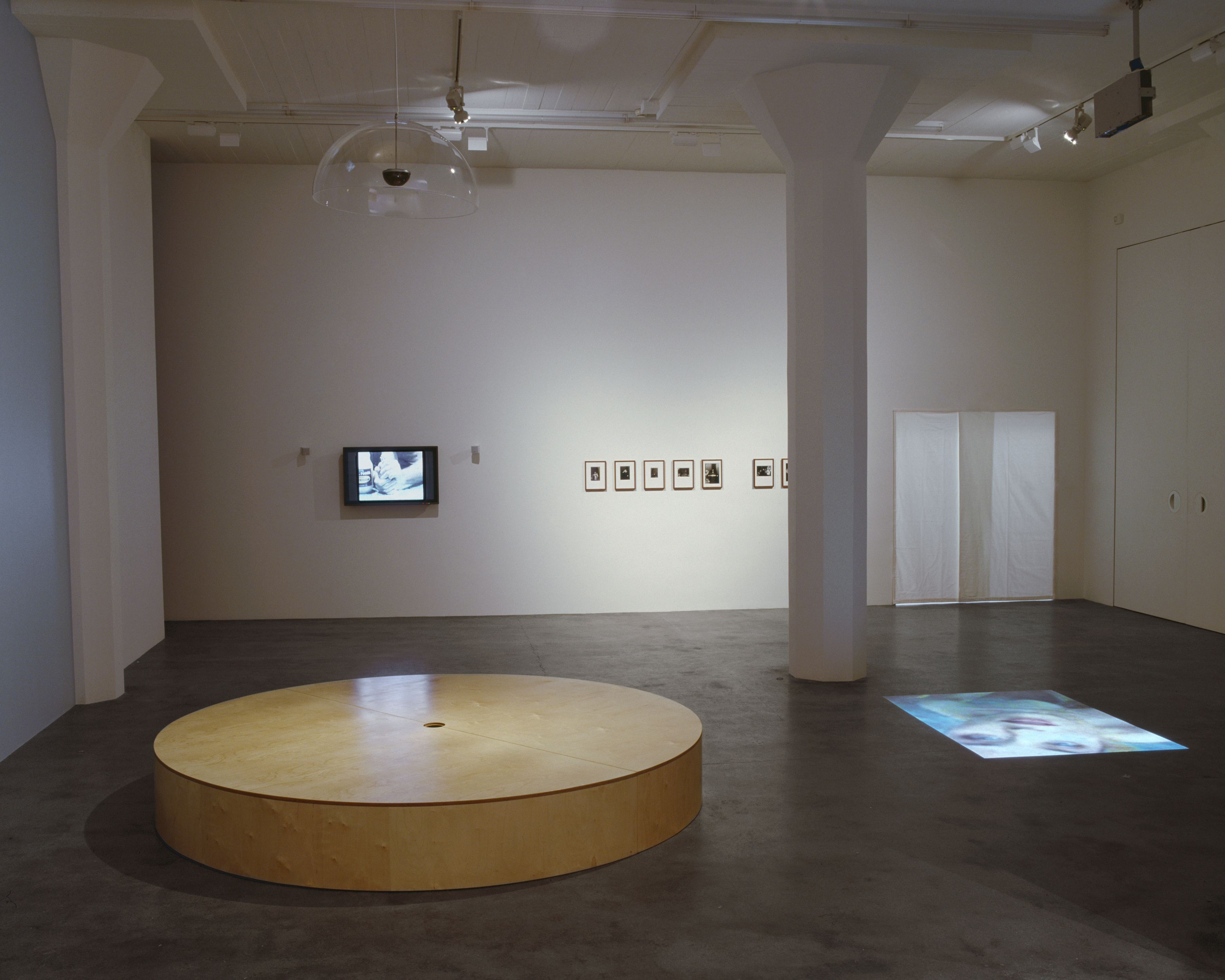 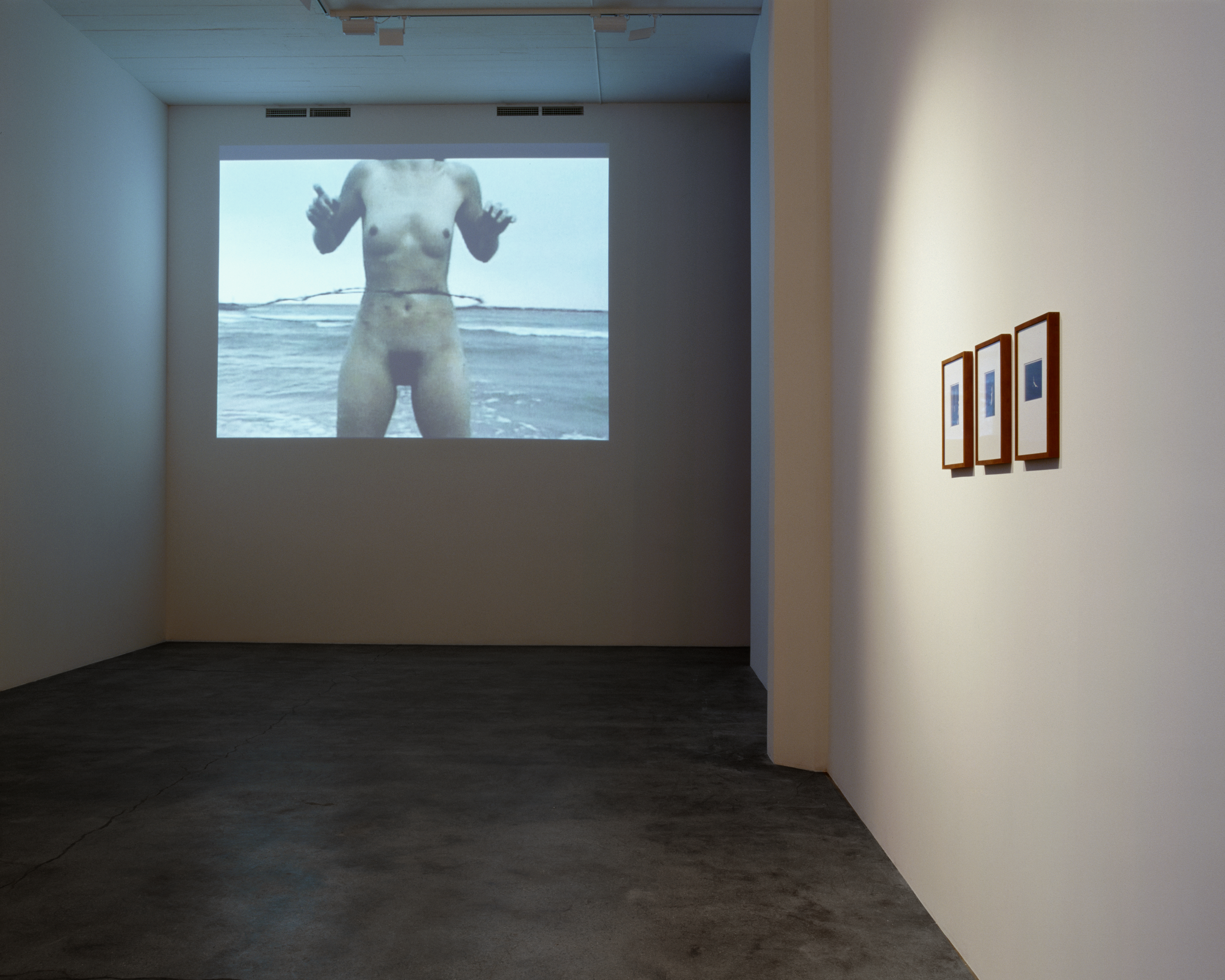 Mutaflor für Wien is a short video projected on the floor. The camera almost literally performs an inner and outer journey. Rist is sitting naked on the floor and looking into the camera that is moving down toward her. Suddenly, she opens her mouth and the camera disappears in the opening, into her body, to finally emerge out of her anus. The film zooms out, goes round, and starts again. It is a short loop that circles around, in, and out of the artist, who ravenously eats the viewer.

In the piece Barbed Hula, we see footage of the artist on a beach, twirling a hula hoop made of barbed wire. It is a short sequence filmed in slow motion, with the camera moving toward her body as it is lacerated by the barbed wire. The hula-hoop act itself becomes unbearable and we can imagine the pain increasing. For the artist, the loop is a metaphor for a trap outside time and space. Like a fakir, Landau repeats an act that causes pain in order to go beyond the corporeal and away from the pain. The rhythmic movement protects her, but the viewer experiences the opposite.

Blue, Red and Yellow – Scalemodel 1 is a minimalist cube from the outside, a sculpture made of plastic. Three of the sculpture’s sides are covered by a transparent, colored film. But the viewer can also step into the work and encounter a wholly different space than what one would have imagined from just seeing the outside of the piece. A smoke machine fills the little space with smoke. The space is bathed in light but at the same time the viewer experiences a kind of blindness because there are no resting points for the eye in the room. The blindness causes the viewer to strain his other senses in order to orient himself; the sense of hearing is affected, as is the perception of time. Those who remain outside the cube can just make out those who are inside through the semi-transparent plastic, like phantoms.

In Door, Floyer uses the room to the utmost. In the spirit of the exhibition’s theme, we can say that her piece points toward an abstract space outside the exhibition space. The viewer is invited to focus on a strong band of light coming from under an existing door. We are quick to think of a place that is bathing in warm, benevolent light, a place that in this case is a pure illusion as we find out soon enough. The viewer realizes that something much more banal is behind the door than what the illusion might have led us to believe initially, though our thoughts might still err in that direction.

The film The Forest takes the viewer on a walk through the woods at night. The viewer is immersed experientially in the journey because he watches the film on a pair of video glasses. The film is initially three-dimensional, with both eyes seeing the same footage shot with two cameras at a slight distance from each other. When the walk in the woods leads us to one specific tree, the two projections part ways. The eyes suddenly follow two different paths that every so often merge into one, and we end up in a place beyond the reality to which we are accustomed, where our sense of space is put to the test.

Hugonnier’s Candle consists of a burning candle. The motif is a recurring one in art history and is associated with a number of themes, such as life, frailty, warmth, and time. Hugonnier’s candle has the scent of a newly extinguished candle. In this way, the viewer is offered, in parallel to the experience of a simple burning candle, a sensory perception of a future moment in time. The senses of vision and smell clash.

In his film Rock My Religion, Graham presents a kind of historical account where ecstasy forms a link between the Puritanical religious movements that arrived in the US in the mid-18th century and the rise of rock music and the youth movement from the 1950s on. The film portrays religious sects rhythmically reciting the Bible, speaking in tongues, taking off their clothes, and shaking and rolling on the floor in a collective effort to drive out Satan. Texts and images depicting these rites are interlaced with footage of rock concerts where ecstasy is attained in a similar way. By dancing in circles, members of the Shaker movement enter a trance. “Shake, rattle, and roll”, howls Jerry Lee Lewis. The gap between the strict, Puritanical religious sects and youth can seem enormous. What they share, however, is the desire to be cleansed collectively through ecstatic dance and recitation.

Hysteria is a video and audio installation that takes mass hysteria at rock concerts as its point of departure. Aitken uses images ranging from the early days of rock to today. The viewer can see the differences in how various crowds react within the specific forum of a “concert”, though we also witness specific individuals’ ecstatic behavior. In Spiritus, Aitken exhibits hysteria (breaths), a second piece that is based on the first but instead focuses on the sound of the rock concert phenomenon explored above. The viewer is here offered a physical experience and a chance to reflect as the sound of another person’s strong breathing creates vibrations in the body of the viewer who lies down on the piece.

McCarthy’s works are often repulsive and difficult to watch. Family Tyranny and Cultural Soup are performance-based works that were staged and directed for video. McCarthy acts in the films’ twisted, grotesque scenes. The artist is in the guise of a deranged television chef instructing the public on how to force-feed one’s child. “My Daddy did this to me. You can do this to your son too,” he mumbles. Despite it being such an obviously exaggerated, theatrical, and staged situation, it is easy to feel ill at the brutality and the connotations of sexual abuse. The trauma that is handed down from father to son constitutes a circle of evil. The way in which McCarthy intones certain phrases and repeats them like a mantra emphasizes the power of repetition: “The father begat the son, the son begat the father.” Mike Kelley, who plays the son, tries in vain to flee but is obstructed by McCarthy, the cruel, patriarchal father. When the son finally gets to leave the house, he does so with a chipper, little announcement: “Time to go to school, Dad!” School therefore becomes the next link in the authoritarian formation of the subject.