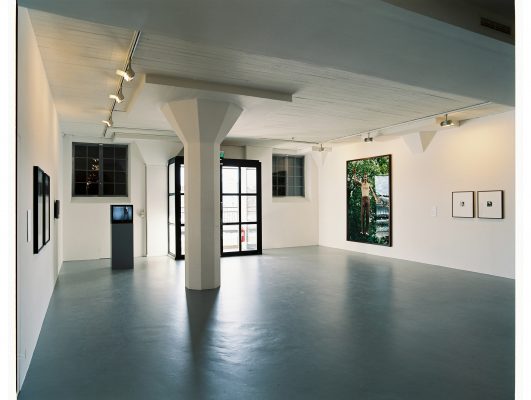 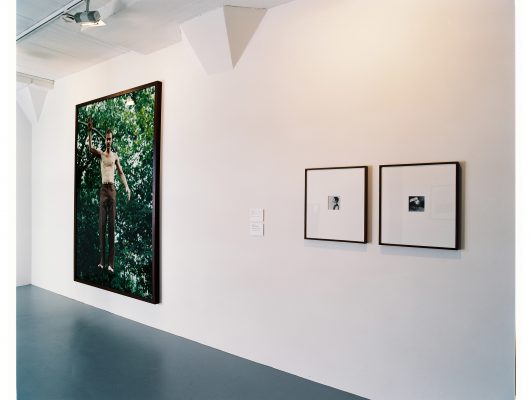 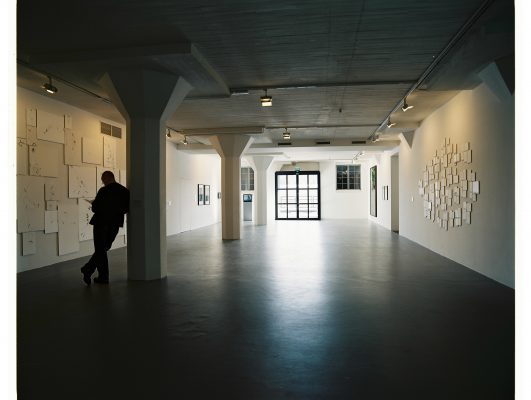 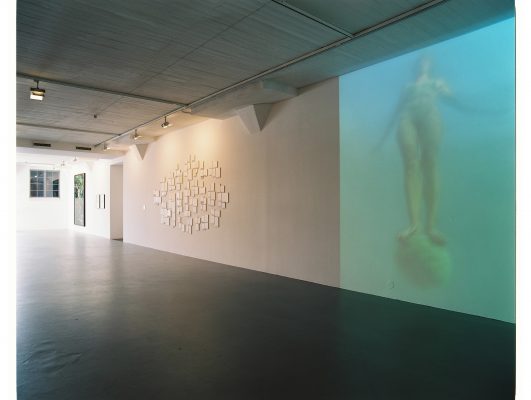 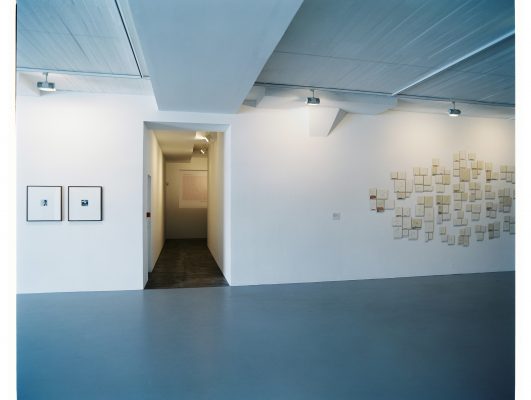 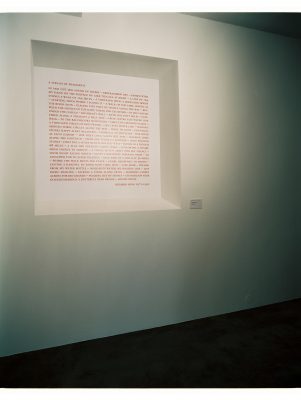 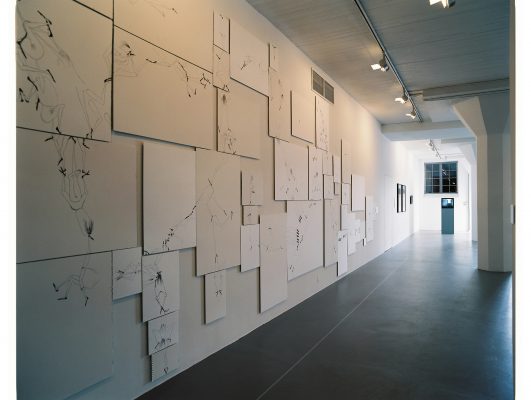 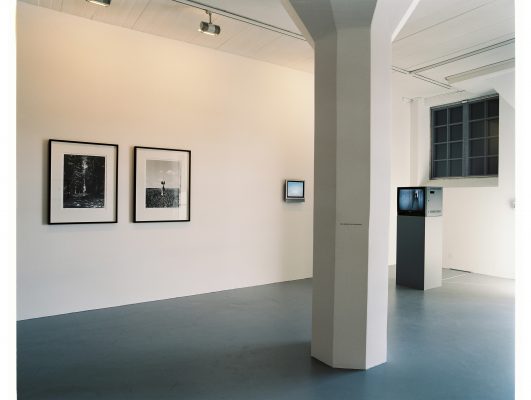 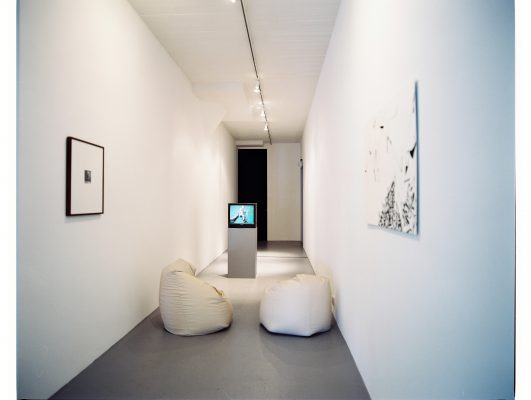 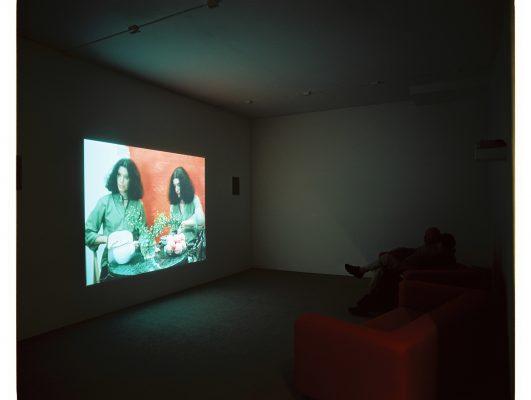 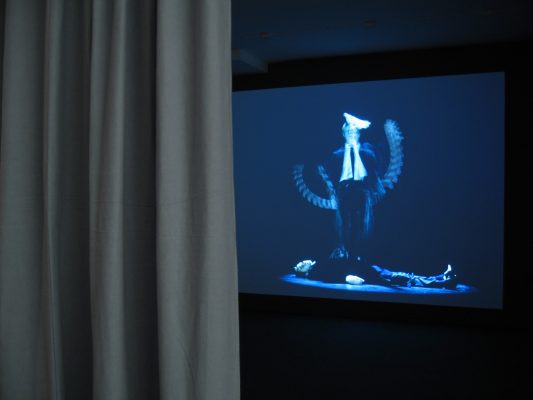 Sigalit Landau b. 1969, Jerusalem (Israel)
A trained dancer, Sigalit Landau frequently uses her own body as a means of expression. In Standing on a Watermelon in the Dead Sea (2005) she balances nude on a watermelon in the said location. She struggles to maintain an upright position, since matter is supposed to float in a horizontal position. She is supported by the extremely salty water that keeps both her and the watermelon afloat. All living organisms need water. But the salt that keeps them buoyant makes the water undrinkable. As a paradox, Israeli scientists have succeeded in growing watermelons with salt water. They are redder and sweeter – in response to the salt water the fruit produces more sugar.

Richard Long b. 1945, Bristol (Great Britain)
Richard Long has walked to put ideas into action and later preserved and described them in sculptures and drawings. He has wandered the world, from the polar circle, to the deserts of Africa, from the very south to the northernmost point of mainland Britain, he has counted pebbles and dragged his hand along the surface of Lake Titicaca. Richard Long’s ramblings are close to nature and its cycle, he sees them as sculptures in themselves. When he presents them in exhibitions he uses nature’s own materials and shapes. The path is a key element – whether as a physical reality or as a symbol of life. The text A Stream of Fragments is the artist’s notes from projects between 1971 and 1990, published in the folder Richard Long Tate Gallery 1990-91.

Danica Phelps b. 1971, New York (USA)
Danica Phelps uses and incorporates parts of her private life in her detailed documentation of everyday activities and finances. With drawings and a self-invented statistical system she notes down all her earnings in green and expenses in red. The uncircled number on the pieces is the money spent, and the circled number is the price of drawing. In the work Walking 9-5 Amsterdam (2001) she has replaced the word “working” with “walking” and walked for several consecutive days between 9 am and 5 pm, an average working day. Starting in the centre of Amsterdam, Phelps walked straight out of town. After two hours she was in the countryside on her way up a mountain. After eight hours she had reached the sea and the city limits. Along the way she bought Fanta or needed a shoe brush. Phelps has undertaken similar projects that involved walking in other cities, including New York and Vienna.

Vangelis Vlahos b. 1971, Athens (Greece)
In the video work Untitled Knight 1 (1997) a knight in shining armour races around on roller skates in a gym. But he does not quite live up to our expectations of glory and grandeur as he rolls around clumsily, falling over more often than he manages to remain upright. His armour gradually falls to pieces – it is an original costume from the making of the film Excalibur (1981), based on the legend of King Arthur and the Knights of the Round Table. Vlahos’s knight exerts himself to control his own body, to keep it moving and in balance. The work was created when Vangelis Vlahos had a study year in Manchester, his first longer period away from his home town Athens. The knight’s efforts has parallels in his experience of finding his bearings in a new place.

Anna Gaskell b. 1969, Des Moines, Iowa (USA)
The drawings in At Sixes and Sevens (2003) together form a pattern that flows across the wall: balancing on one another’s bodies in high heels, the nude, lanky female bodies clamber, slither and stretch from one sheet of paper to the next. This tangle of bodies represents a menacing version of the children’s game King of the Castle, where you climb on each other to get on top. Anna Gaskell is famed for her monumental photographs of young girls in various psychologically charged situations. She is inspired by stories she picks up or personal experiences. In this work, she has eschewed the camera, explaining that she couldn’t expect her models to assume the postures and motions that her imagination required.

Sam Taylor-Wood b. 1967, London (Great Britain)
A man in a suit with a white dove on his head is casually tap-dancing on an equally unconcerned man’s chest. The rhythm and duration of the dance appear to be determined by the dove. With a detached gaze the man taps rhythmically and more and more frantically, until the bird flies off. The film Ascension (2003) is a four-and-a-half-minute long dramatic image of an absurd scenario. The major photographic work The Leap (2001) portrays a bare-chested man hovering above the ground against a background of leafy trees. The word “leap” in the title relates to the physical activity and to an obstacle.
Sam Taylor-Wood is a photographer and film-maker and both works featured in this exhibition deal with the boundaries between the sacral and the profane – mixing the religious imagery of renaissance and baroque art with today’s secular and urbane world view. Many of her works approach the contemporary spirit and the role of the individual in a social constellation.

Rebecca Horn b. 1944, Michelstadt (Germany)
In her earliest performances, Rebecca Horn worked with costumes that elongated body parts. Her documentation of four of these works were selected for Walking & Falling. In Kopf-Extension/Head Extension (1972) a person wears a gigantic head cone and is dependent on four assistants in order to move around. It becomes obvious how the long cone changes the parameters – the body’s centre of balance is shifted and the person has to take one step at a time and learn to walk again. In Handschuhfinger/Finger Gloves (1972) the fingers are extended and explore the space with their new proportions, while the extended shoulders in Schulterstäbe/Shoulder Extensions (1971) and the white fan in Weisser Körperfächer/White Body Fan (1972) respectively enhance and challenge the body’s balance and mobility.
For another work Rebecca Horn created a unicorn costume for a woman who was chosen for her way of walking. Horn asked her to walk through a field of wheat and along a forest alley in a costume that was tied around her body to hold up a horn on her head. Einhorn 1 and Einhorn 2 are photographic documentations of this performance.
The body extensions and the kinetic sculptures were recycled by Horn in films such as Der Eintänzer (1978). This is a feature film without apparent logic. Rebecca Horn has conjured up a scenario involving people she has known and met. The characters and their destinies are intertwined when they meet in her New York studio while she herself is abroad. Rebecca Horn’s monotonous narrative voice and countless obscure scenes – a ballet dancer balancing an ostrich egg on her head, a table that starts dancing and a woman swinging out through a window – blend into a surrealistic story against the backdrop of Central Park.

Ann Hamilton b. 1956, Lima, Ohio (USA)
In 1984-1993, Ann Hamilton worked on the photographs untitled (body object series) consisting of 16 portraits where the artist interacts with various everyday objects and materials. The objects that were added appear to emerge from her body like extra limbs, or as if the objects have acquired a body. The hybrid has traits of madness and child play. With one part of her body in camouflage, such as a bush on her head, several senses are blocked from the outside world and with those limitations the body makes its way. Hamilton is known particularly for her large-scale installations, often incorporating tactile materials such as horse hair, honey and fabrics. Her installations frequently include a person performing a repetitive task.

Bruce Nauman b. 1941, Fort Wayne, Indiana (USA)
In the 1960s and early 1970s, many dancers and artists were experimenting with everyday actions and body movements. In several of Bruce Nauman’s works he explores a simple movement and isolates it, falling backwards into a corner as many times as he can manage, stomping out the beat in his studio, walking in an exaggerated way or in patterns. All these explorations were documented in film and video. In Walk with Contrapposto from 1968 the artists propels himself along a narrow corridor by means of huge hip movements. Unlike early sculptures of the human body, the classical Greek and renaissance artists portrayed the human body in asymmetrical, more relaxed and realistic poses, to give the illusion of movement in a static figure. In the pose, hips and legs are turned in a different direction from the head and shoulders. Nauman has used the counterpoised position and translated it into a motion and walk.

Sigalit LandauStanding on a Watermelon in the Dead Sea2005