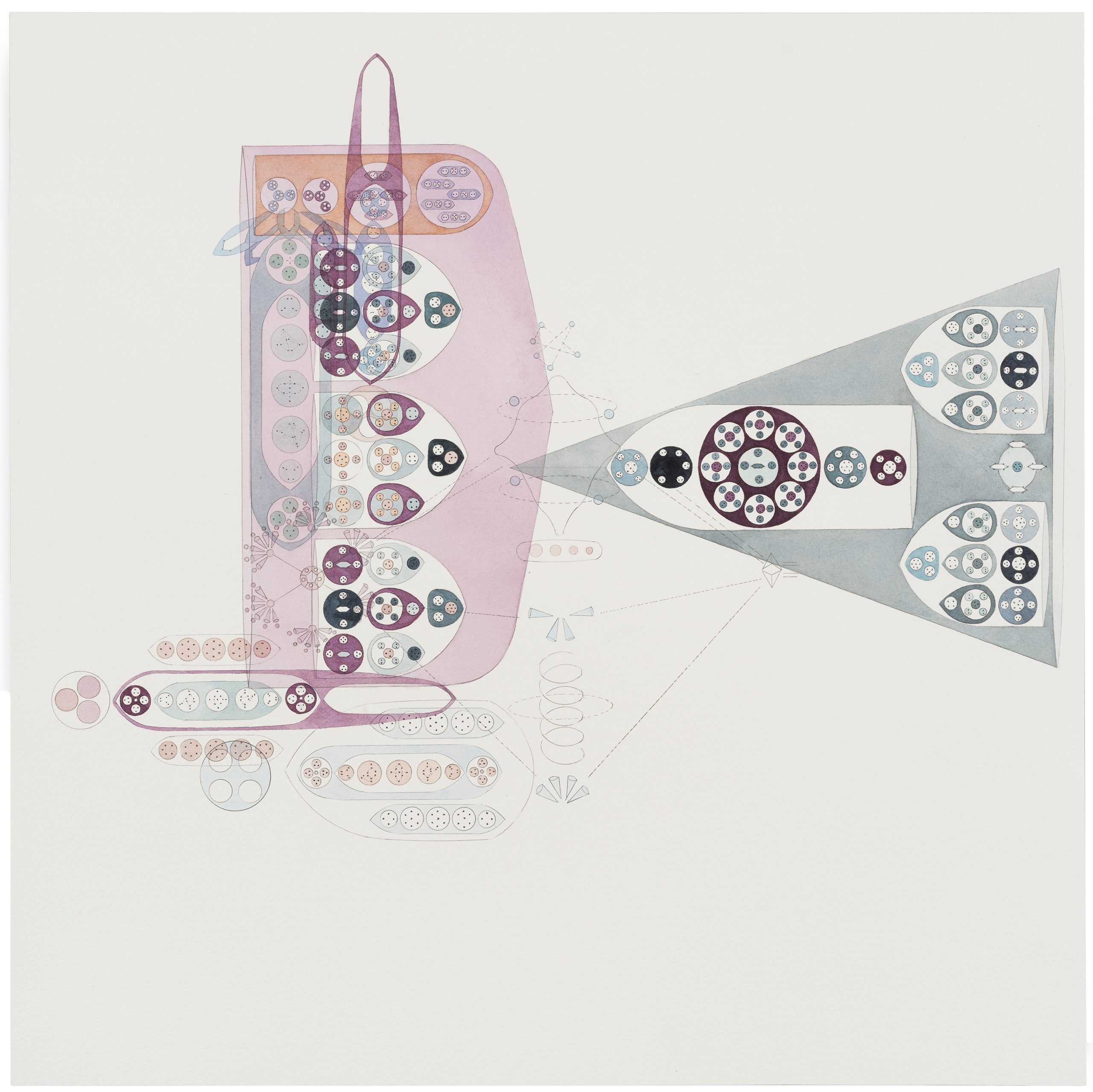 The exhibition transforms Magasin III into a laboratory of sorts where, among other things, the artist examines the communication between humans and plants. As a visitor to this magical world, one is offered the opportunity to discover and explore the interplay between the senses.

Christine Ödlund’s art has enchanted me for many years. Our exhibition presents her entire fascinating breadth – including everything from installations with vivaria, animations of the dance of plants and audio works for air roots, to stained glass windows and painted musical scores. Metaphysics meets science in her singular, entirely unique world.

The focal points of the exhibition are the installations Xylem Floem (2016) and Astral Flight Adapter (2016), both of which are produced specifically for the exhibition. Xylem Floem consists of a group of vivaria featuring ferns and other plants. As a visitor, one can enter a grotto-like space where sound experiments with roots occur. Signals from these experiments are then transferred to the installation Astral Flight Adapter, where they take on the form of sound and moving images.

Christine Ödlund finds inspiration in, among other things, synesthesia, a neurological condition, and Theosophy, a philosophical teaching that gained ground during the late 1800s. In addition to the new, large scale installations, Christine Ödlund has created a plethora of paintings using plant pigments, time-lapse films featuring both plants and metals, and several new audio works. The exhibition bathes in a light colored by stained glass windows constructed using traditional techniques of the middle ages. Old meets new in this exhibition, which is a contemporary Gesamtkunstwerk.

Christine Ödlund was born in 1963 in Hägersten, Sweden. She lives and works in Stockholm. Christine Ödlund’s oeuvre has a broad scope with roots in several disciplines. She studied composition at Elektronmusikstudion EMS Stockholm after first studying photography at Konstfack University College of Arts, Crafts and Design from 1992 to 1995 and video arts at the Royal Institute of Arts in Stockholm from 1995 to 1996. Since her first solo exhibition in 1995 at the alternative art space Ynglingagatan 1 in Stockholm, she has created numerous intersections of art, science, and music. She has regularly presented solo exhibitions at galleries and has taken part in music and film festivals in Sweden and abroad.

Christine Ödlund’s first solo museum exhibition was at the Trondheim Museum of Art in Norway in 2014. In recent years, her work has been shown in group exhibitions at the eighth Momentum Nordic Biennial of Contemporary Art in Moss, Norway (2015); the Marrakech Bienniale in Morocco (2014); the Stedelijk Museum in Amsterdam, Netherlands (2013); Lunds Konsthall in Lund, Sweden (2013); MOT – Museum of Contemporary Art Tokyo in Japan (2012); and The Moderna Exhibition for contemporary Swedish artists at Moderna Museet in Stockholm (2010). In 2011, Christine Ödlund was nominated for Swedish newspaper Dagens Nyheter’s Culture Prize.

Christine Ödlund will hold a talk and concert on Friday, February 26, 5-7pm at Dome of Visions (Valhallavägen 79, Stockholm).

In conjunction with the exhibition, Magasin III has produced a pamphlet with texts relating to the artworks and exhibition that will be distributed to all visitors free of charge. The pamphlet is available as a PDF on magasin3.com.

A richly illustrated book on Christine Ödlund’s works will be published in the fall of 2016. Ödlund will at that time also release her second album in the fall. Her first full-length album, Phenomena, came out on iDEAL Recordings in 2008, and is available on Spotify.

The Spring Season at Magasin III: