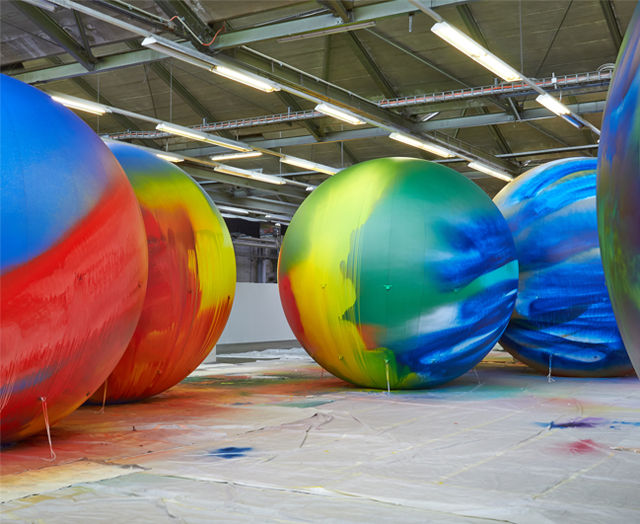 Our fall season opens at Nybroplan in central Stockholm with a new, monumental outdoor installation by Katharina Grosse. The work will be shown at Nybroplan September 18–21, and later moved to Frihamnen (the Free Port), where the Magasin III fall exhibition brings together works by Katharina Grosse, Sol LeWitt and Walter De Maria. All three artists have had major exhibitions at the museum since its beginning in 1987.

The exhibition wizz eyelashes is a play on both the history of art and Magasin III’s own exhibition history. Works by the conceptual minimalists Sol LeWitt and Walter De Maria have been installed alongside with Katharina Grosse’s expressive and abstract painting. All three artists have previously had solo exhibitions at Magasin III, where their work is now being brought together for the first time.

Sol LeWitt exhibited his first wall drawing in 1968, introducing an approach that would change the way we understand art today. At Magasin III in 2009 seven of his wall drawings were installed in the same room in which wizz eyelashes appears today. For the first time we are showing a wall drawing by LeWitt from our collection — a work drawn by five people full-time over a five week period this summer. The exhibition also includes two sculptures by LeWitt from the Magasin III collection.

In 1988 Walter De Maria was the first artist ever to be featured in a solo exhibition at Magasin III. Now, twenty-six years later, we are once again showing Large Rod Series: Circle/Rectangle 13 in the same place in the same room as it first appeared in 1988.

Ten years ago Katharina Grosse painted directly onto the walls, ceilings and floors of Magasin III, transforming the exhibition space into a painting that visitors could enter and within which they could move. In wizz eyelashes we are showing two of the paintings on canvas that were part of Grosse’s 2004 exhibition. Based on images of part of the large site-specific painting created directly on our walls and floor, she has created a completely new installation of printed fabric that hangs where the original used to be, now hidden under many years of layers of wall paint. In collaboration with Grosse we have chosen to let her new work act like a kind of backdrop for De Maria’s work.

Katharina Grosse –
in Nybroplan and Magasin 6

Katharina Grosse has created a new and monumental  installation for Magasin III – an expressive and abstract painting in the form of six enormous spheres.  The installation is first on view at Nybroplan (Sept 18–21, 2014) and then in Magasin 6 (Sept 25-Dec 14, 2014), an industrial storage space in the Free Port (Frihamnen), a 7 minute walk from the museum.

We are now Magasin III Museum & Foundation for Contemporary Art. The time has come for our name to better reflect what we do. As the collection has continued to grow in scope and significance, it has become clear that a key part of our focus should be creating exhibitions that allow us to look back over our history and use it as a reference point for understanding where the visual arts are today. Nothing better illustrates this than our fall exhibition ’wizz eyelashes’, that presents artists that have fascinated our institution since the beginning. 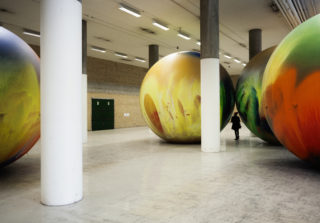