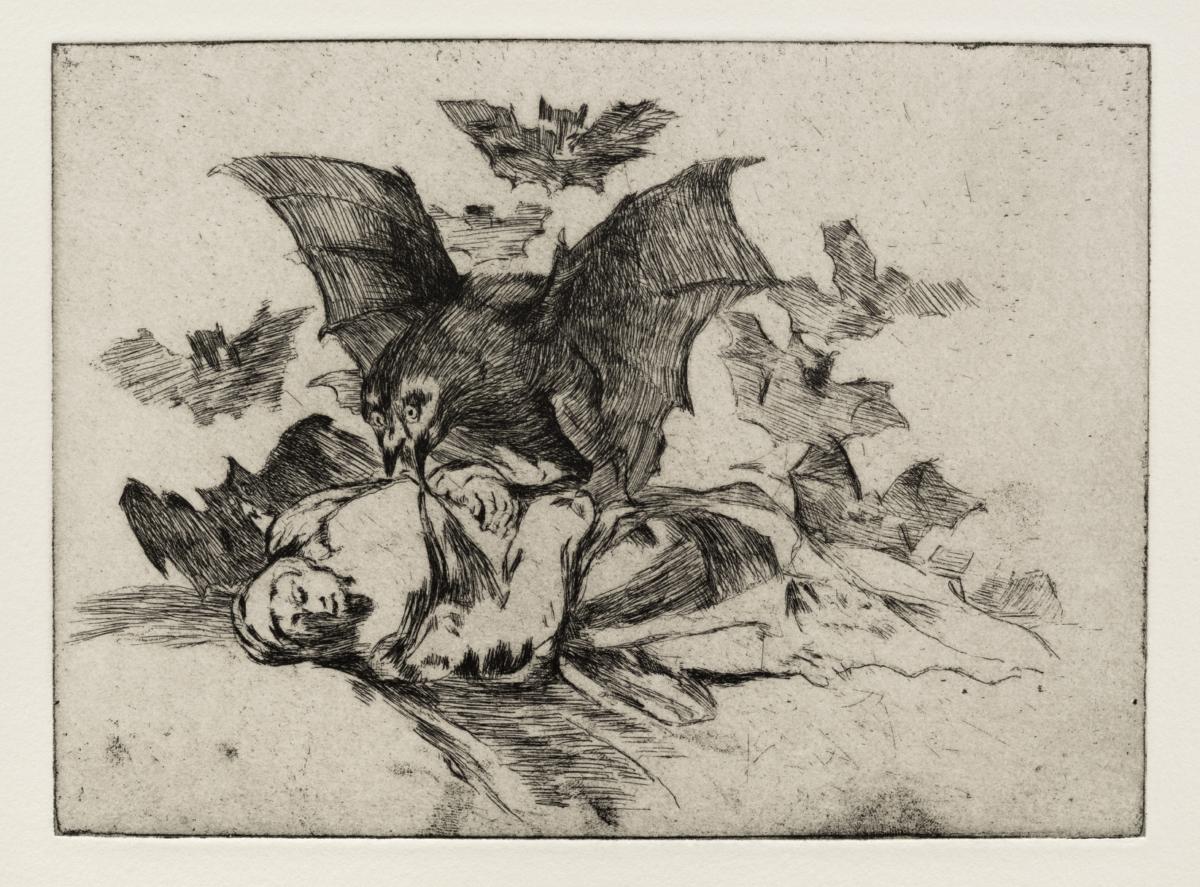 With drawing, sculpture and film that often combine scenes of violence with absurd or humorous elements, Jake and Dinos Chapman deliver powerful statements on society, politics and religion. Deeply engaged in contemporary issues of morality, the Chapman brothers are intent on putting the viewer in a state of complete moral panic.

Time and again, the Chapman brothers have returned to depictions of war by the Spanish artist Francisco Goya (1746-1828). Through a generous loan from Sweden’s Nationalmuseum, twenty plates from Goya’s original edition of etchings will now enter in direct dialogue with the Chapman brothers’ works. The Nature of Particles showcases two artistic oeuvres—one historic and one contemporary—as a means of underlining the topicality and complexity that the works represent.

I believe most of us are frightened by evil, yet at the same time, humanity is the source of all wars and has an obvious propensity for war, violence and the grotesque. The exhibition presents an encounter between two groundbreaking artistic oeuvres. Though they are separated by 200 years, these artists touch upon the darkest sides of humanity—and are often met with radically different responses.

Presented in the exhibition is a selection of recent works by the Chapman brothers, as well as a new, site-specific installation with poetry and taxidermied crows. A central work is The Sum of All Evil (2012–2013), in which four dioramas depict an intense landscape inhabited by thousands of miniature figures. An inferno of atrocities incessantly rages on—a nightmare behind glass, at once both repulsive and fascinating. Positioned here and there throughout the exhibition space are life-sized figures clad in white Ku Klux Klan outfits. They stand contemplating the artworks, wearing smiley badges on their chests and thick rainbow colored socks and Birkenstock sandals on their feet—strong symbols that stand for very different ideologies. These figures are also feature in the cinema installation Kino Klub (2013), where one can see Fucking Hell, a montage of films the Chapman brothers have created since the early 1990s.

The Nature of Particles stems from the exhibition Like A Prayer, currently on view in two adjacent rooms. Featured here is Disasters of War (1999), one of many Chapman brothers’ works based on Goya’s depictions of war. In these 83 etchings they have both made additions to Goya’s motifs and made their own freestanding etchings including contemporary symbols of violence, elements of childish humor and surrealist impulses.

A Collaboration with Sweden’s Nationalmuseum:

A generous loan from the collections of Nationalmuseum forms the hub of the exhibition: twenty plates from Goya’s Los Desastres de la Guerra (ca 1810-1823) engage in direct dialogue with works by the Chapman brothers. Goya’s suite of etchings depicts the atrocities inflicted upon the Spanish people by Napoleon’s invading army, but also the subsequent revenge exacted. The images are often described as the first unromanticized depictions of war. Comprised of 80 etchings, the suite was first published in 1863, a full 35 years after Goya’s death.

Brothers Jake Chapman (b 1966) and Dinos Chapman (b 1962) graduated from the Royal College of Art, London in 1990 and have been collaborating since. The Chapmans have held solo shows at Serpentine Sackler Gallery (2013); The State Hermitage Museum, St. Petersburg (2012) and Tate Britain, London (2007), among others. In the mid-1990s, their sculptures were included in the Young British Artists showcase exhibitions Brilliant! and Sensation. Other selected group exhibitions include the 4th Moscow Biennale of Contemporary Art (2011); 17th Biennale of Sydney (2010); Kunstvereign, Hamburg (2009) and Kiasma, Helsinki (2006). In 2003, the brothers Chapman were nominated for the Turner Prize. The exhibition Jake and Dinos Chapman, John Currin was held at Magasin III in 2007. For a full biography please click “download press release as PDF” or “print press release” (above).

Francisco Goya (Francisco de Goya y Lucientes) was born in 1746 in Fuendetodos/Zaragoza, Spain, and died in 1828 in Bordeaux, Frankrike.

In conjunction with the exhibition, Magasin III has produced an audio guide with stories and comments by Tessa Praun, Jake Chapman and Karin Sidén, Museum Director of Prince Eugen’s Waldemarsudde. The audio guide is available to download or stream from magasin3.com (from February 26, 2016).

Jake and Dinos Chapman, The Nature of Particles, 2011.