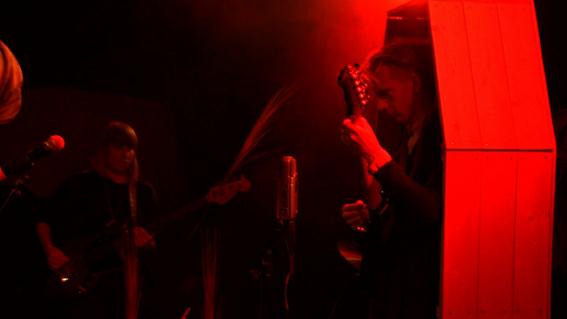 In the spring of 2011, Magasin 3 has invited a number of artists to produce work that lands somewhere between performance and exhibition.

First in line is Erik Aalto, perhaps best known as his alter ego Sir Eric Beyond, nominated for best pop album by Swedish Radio’s P3 for “Sir Eric Beyond and the Avant-garde” (2006). Beyond’s tragic passing in Autumn 2010 was honored by the performance “Sir Eric Beyond is Dead!” at Kägelbanan in Stockholm.

On February 10, Erik Aalto takes over Magasin 3 with Antidote, a performance and concert that segues into an exhibition on February 17.

“Erik Aalto, a.k.a. Sir Eric Beyond, is the Swedish art scene’s best kept secret. As Sir Eric Beyond, he has been treading the boundaries between performance and music for many years while maintaining his own artistry as Erik Aalto. Now he is merging his alter ego with his artistic identity creating a fusion that will be very exciting to see!”

In conjunction with the exhibition, the art-app Call and Response was produced. It is an interactive video-adaptation of Aalto’s work The object is performance. Available for download on iPhone and iPad.

Antidote is part one of three in PERFORMANCEXHIBITION: