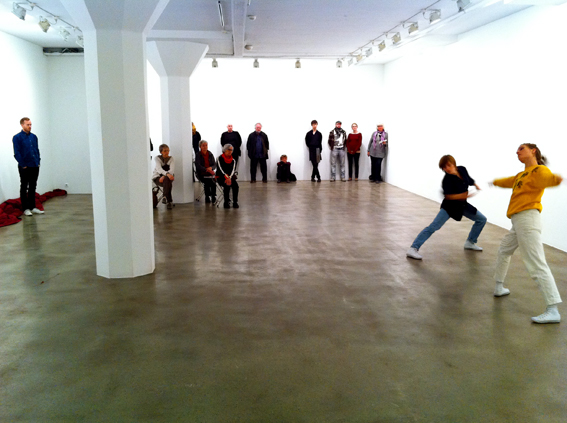 In the spring of 2011, Magasin 3 has invited a number of artists to produce work that lands somewhere between performance and exhibition.

Björn Säfsten has worked as a choreographer in Sweden and internationally since 2003, working with his own constellations of dancers and artists while also completing commissions for other ensembles. With a razor-sharp eye for the full spectrum of movement, he creates pieces that focus on both physical limitations and possibilities.

For Magasin 3, Björn Säfsten has created Corduroy de-constructed, a conceptual performance that allows the choreographer to present movements for observation, inspection and inspiration. It is the deconstruction of the performance Corduroy, created for a large stage in 2010, restaged in three separate yet corresponding choreographic parts performed in a loop. The stage is replaced by the more intimate setting of an art gallery. Performed by some of Sweden’s best young dancers in close proximity to the audience, the movements are recontextualized establishing new approaches to the work.

Richard Julin, curator of the exhibition:

“Björn Säfsten is absolutely one of Sweden’s most interesting choreographers right now. I have followed his dance productions closely and been fascinated by the precise and sharply defined choreographic language. It is with great pleasure that Magasin 3 presents the new work “Corduroy de-constructed” in one of our exhibition galleries for a visual arts public in April.”

Co-produced by NorrlandsOperan and Magasin 3 with the support of the Swedish Arts Council.

Corduroy de-constructed is part two of three in PERFORMANCEXHIBITION: