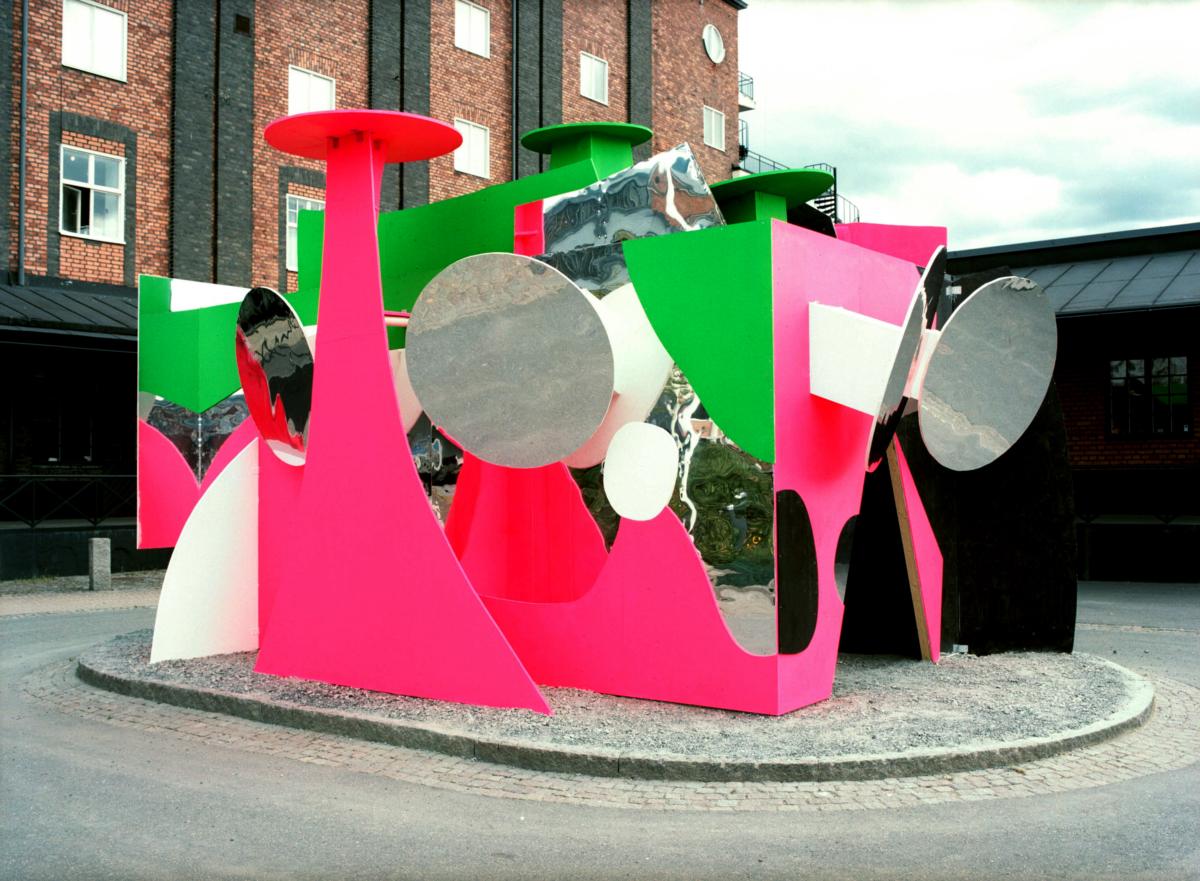 We are proud to have presented new oeuvres and outstanding exhibitions over the past 20 years. Magasin 3 has always worked closely with artists, generating new works – this is the core of our operation. As the title of this exhibition, To be continued… indicates, we are now focusing on the future.

Magasin 3 has been open to the public, producing exhibitions for 20 years now. Over the past two decades, many artists have created works specifically for the space, which is unique on the Scandinavian art scene. These works, which have been added to the Magasin 3 collection, are now being exhibited together for the first time. The exhibition features new, exciting encounters such as Mona Hatoum’s pulsating, electric weave Undercurrent (2004) with Tony Oursler’s blinking, talking cubes, Frequency Spectrum (2002), or Cosima von Bonin’s boat Item (2001), which will be undressed and dressed in its hand-sewn costume, with Chris Burden’s The Mexican Bridge (1998- 1999), constructed out of thousands of Meccano parts. To be continued… starts outdoors, with a new work by Matti Kallioinen whose architectural and video works are inspired by science fiction and fairytales.

This fall, we will also have a programme packed with events featuring speakers, films and performances. The first event is entitled “Previously at Magasin 3…” It features Daniel Birnbaum (head of the Städelschule Academy of Art in Frankfurt and associate curator at Magasin 3) in discussion with participating artists and curators. Topics will include reflections on processes, productions, collecting, etc. The talk takes place Thursday, September 6, 3pm at Magasin 2 (next to the Tallinn terminal, ground floor).

A catalogue highlighting the Magasin 3 collection will be published in conjunction with the exhibition. The book will be launched in September 2008

Janine Antoni was born 1964 in Freeport, Bahamas. She lives and works in New York City, USA.

John Bock, born 1965 in Gribbohm, Germany. He lives and works i Berlin, Germany.

Cosima von Bonin was born 1962 in Mombasa, Kenya, raised in Austria, and is now based in Cologne, Germany. She studied at the University of Fine Arts in Hamburg, Germany.

Chris Burden was born in 1946 in Boston, Massachussetts and currently lives and works in Topanga, California. He has had solo exhibitions at museums worldwide including: New Museum, NY; Los Angeles County Museum of Art, Los Angeles, CA; Tate Gallery, London and The Baltic Centre for Contemporary Art, Gateshead. He was also featured in the 48th Venice Biennale. His work is included in prestigious collections including the Museum of Modern Art, New York, NY; Broad Art Foundation, Los Angeles, CA; Walker Art Center, Minneapolis; Wexner Center for the Arts and Whitney Museum of American Art, New York. In 1999, Burden had a solo exhibition at Magasin 3 that included the production of four bridges.

Pedro Cabrita Reis, born 1956 in Lissabon, Portugal where he lives and works.

Leonard Forslund, born in Landskrona, Sweden 1959. He lives and works in Copenhagen, Denmark.

Felix Gonzalez-Torres was born in Cuba in 1957 and died in New York in 1996. He received a BFA from the Pratt Institute, Brooklyn, NY in 1983 and an MFA from the International Center of Photography, New York University in 1987. He participated in the Whitney Museum Independent Study Program in 1981 and 1983. During his lifetime, he had solo exhibitions at the Guggenheim Museum, New York (1995); The Museum of Contemporary Art, Los Angeles (1994); The Hirshhorn Museum and Sculpture Garden, the Smithsonian Institution, Washington, D.C. (1994); the University of California, Berkeley Art Museum (1994); Musée d’Art Moderne de la Ville de Paris (1993); The Museum of Modern Art, New York (1992); the Brooklyn Museum of Art, New York (1990); and The New Museum of Contemporary Art, New York (1988), among others. His work has continued to be shown extensively, including solo exhibitions at PLATEAU and Leeum, Samsung Museum of Art, Seoul, South Korea (2012); MMK Museum fur Moderne Kunst, Frankfurt (2011); the Museum of Fine Arts, Boston (2011); Fondation Beyeler, Basel, Switzerland (2010); Artpace Foundation, San Antonio, Texas (2010); The United States Pavilion, the 52nd Venice Biennale (2007); Hamburger Bahnhof, Museum für Gegenwart, Berlin (2007); The Douglas Hyde Gallery, Dublin (1999-2000); and Museo Tamayo, Mexico City (1996), among others. He had a solo exhibition at Magasin 3 in 1992.

Mona Hatoum, born 1952 in Libanon. After studying at the Byam Shaw School of Art and the Slade School of Art, she rapidly made a name for herself in the 1980s with a series of acclaimed performance and video works. In 2004, Magasin 3 produced, in collaboration with Hamburger Kunsthalle and Kunstmuseum Bonn, a comprehensive presentation of Hatoum’s work. The show included around 60 artworks, as well as a large-scale new installation made specifically for Magasin 3 Stockholm Konsthall. The artist lives and works in London and Berlin.

Alfredo Jaar was born 1956 in Santiago, Chile. He lives and works in New York City, USA.

Matti Kallioinen was born 1974 in Uppsala. He lives and works in Stockholm.

Matts Leiderstam, born 1956 in Gothenburg, Sweden. He lives and works in Stockholm.

Ernesto Neto, born 1964 in Rio de Janeiro where he lives and works.

Georg Oddner, born 1923 in Stockholm. He lives and works in Malmö, Sweden.

Tony Oursler, born in 1957, lives and works in New York. He received his BFA from the California Institute of the Arts in 1979. Oursler’s work has been exhibited in prestigious institutions including the Walker Art Center, Minneapolis; Documenta VIII, IX, Kassel; Museum of Modern Art, New York; Whitney Museum of American Art, New York; the Centre Georges Pompidou, Paris; the Carnegie Museum of Art, Pittsburgh; Skulptur Projekte Münster; Museum Ludwig, Cologne; the Hirshhorn Museum, Washington; and the Tate Liverpool. Tony Oursler had a solo exhibition at Magasin 3, Station, in 2002.

Fred Sandback, born in Bronxville, New York 1943 where he lived and worked until his death in 2003.

Lara Schnitger, born 1969 in Haarlem, The Netherlands. Schnitger studied at The Hague: Royal Academy of Art from 1987-1991 before spending a year at the Kitakyushu Centre for Contemporary Art in Southern Japan. Her works have been exhibited at museums and galleries around the world, including the Art Center in Xiamen, Santa Monica Museum of Art, UCLA Hammer Museum in Los Angeles, PS 1 Contemporary Art Center in New York, Royal Academy, Kunstwerke in Berlin and The Power Plant in Toronto. Schnitger has also participated in the Liverpool Biennal in 1999 and the Shanghai Biennal in 2002. She lives and works in Los Angeles, USA.

Nahum Tevet, born 1946 at Kibbutz Mesilot in Israel. He lives and works in Tel Aviv, Israel.

James Turrell was born in Los Angeles in 1943, and lives and works in Arizona. He has had solo exhibitions at the Gugenheim Museum, New York (2013); the Los Angeles County Museum of Art (2013); and the Museum of Fine Arts, Houston (2013); the Mattress Factory, Pittsburgh, Pennsylvania (2002); the Museum of Contemporary Art, Los Angeles (1984); the Whitney Museum of American Art, New York (1980); and the Stedelijk Museum, Amsterdam (1976), among others. Permanent commissions include the Chichu Art Museum, Naoshima Island, Japan; Crystal Bridges Museum of American Art, Bentonville, Arkansas; MMK Museum für Moderne Kunst, Frankfurt; Turrell Museum, Colomé, Argentina; and the Yorkshire Sculpture Park, York, United Kingdom. Turrell has been the recipient of numerous awards, including a grant from the National Endowment for the Arts (1968) and The John D. and Catherine T. MacArthur Foundation Fellowship (1984), and was named a Chevalier des Arts et des Lettres by the French Government (1991). He had a solo exhibition at Magasin 3 in 1994-95.

Audioguide: To be Continued…