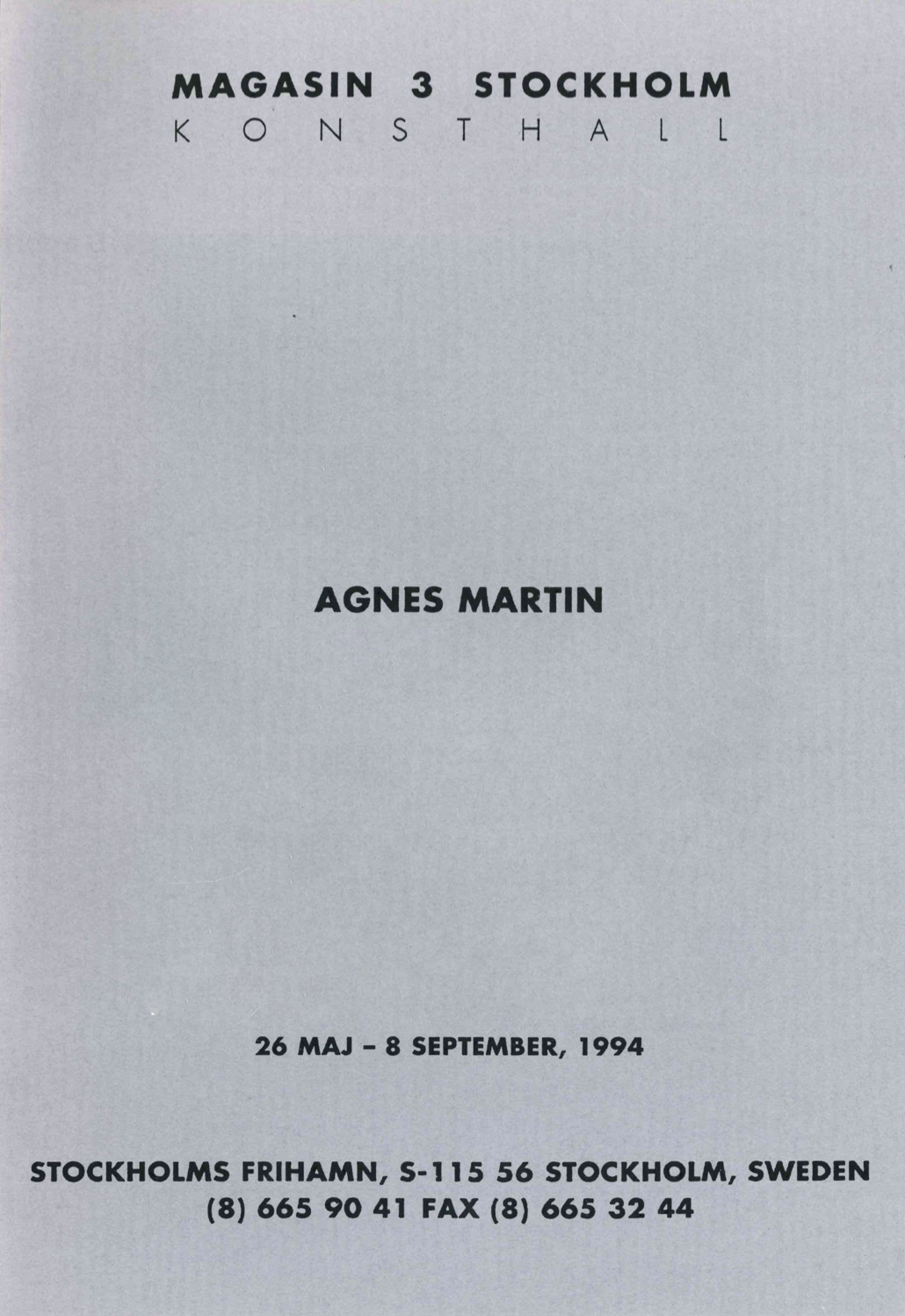 Exhibition booklet no 1
Text: Eva Hallin, Art Historian and Critic
No of pages: 5

Agnes Martin has been called “the most famous unknown artist in America”. Since 1958 and her first solo exhibition at the Betty Parsons Gallery in New York, the critics have treated her with great respect and her work has been sold to collectors and museums in the USA as well as in Europe. Her friends and colleagues at Betty Parsons included such well-known artists as Mark Rothko, Barnett Newman, Ad Reinhardt, Ellsworth Kelly and, for a while, Georgia O’Keeffe. Still there are few people who, when prompted, are able to place Martin and her work on the map of the art world.

The reasons are manifold, amongst them the fact that Martin has chosen to shun the limelight. After nine years in New York she left and settled finally in New Mexico where she single-handedly built herself an adobe house in the desert. For several years she stopped painting, a period of artistic inactivity that lasted until 1974.

Nor has Agnes Martin been shown publicly very often over the years. In 1973 the Institute of Contemporary Art in Philadelphia approached her for a retrospective and later, in 1992, the Whitney Museum mounted an exhibition. The Stedelijk Museum in Amsterdam exhibited her paintings and drawings in 1991.

Furthermore, she is difficult to place in a specific category or school. More often than not she is seen as a Minimalist because of her use of the grid and soft colors. She, however, adamantly pronounces herself an Abstract Expressionist. “My work is about emotion”, she declares. “Not personal emotion, abstract emotion. It’s about those subtle moments of happiness we all experience.”

To confront Agnes Martin’s paintings as a spectator is to face something of a challenge. The paintings are spare in their expression and they hold a subtle precision which grant them an emptiness that at first sight could be construed as muteness.

The titles do not offer any reliable clues. As in this exhibition, Martin’s paintings are often labelled “Untitled”, but even with other titles they are bewildering. How, you ask yourself, can these verticals and horizontals refer to places or natural phenomena, such as “The Beach”, “Drops”, “Leaf in the Wind” and “White Stone”, to mention but a few of Martin’s other works. Quite clearly these paintings do not depict landscape subjects nor are they representations in any traditional meaning.

Reading her paintings closer you will however understand what Agnes Martin has in mind. Close up you can distinguish how the sharpness of the lines is sometimes enhanced and sometimes seems to dissolve in relation to the surface. No technical devices have been used, the hand has simply followed the texture of the surface. From a distance this manifest materiality is suspended, the treatment of the surface and the bands of color rather seem to create an immateriality, a play between light and shadow. At the same time, the austerity of the composition contributes to the opaque, closed impression. Through the interaction of these elements Martin aims at creating an atmosphere of recognition; to re-experience the feeling of being in a landscape. It is this allusion to nature that has prompted critics to call her work “abstract sublime”.

Agnes Martin’s esthetic is rooted in a transcendental reality that repudiates the self-centeredness of material life. She is not religious, since religion implies a belief in a higher order. Her philosophical ideas are sprung from sources such as the Bible, Zen and Taoism. From them she derived the notion of the positive and holistic aspects of reality as well as a strong streak of pragmatism. But she emphasizes that the creation of art is not an intellectual pursuit but above all a question of emotional response. Her paintings are built on intuition and feeling.

Keeping this in mind it is easier to understand her choice of artistic expression. First and foremost it is non-hierarchal and the lines as well as the square format of the paintings are part of the concept of perfection that is not to be found in nature but exists in our minds. Pure abstraction communicates the immaterial dimension of reality.

To Agnes Martin the only purpose of art is to offer beauty, joy and perfection. Beauty and joy originate from as well as express a feeling of an existential miracle, she says, and it is accessible to all of us. When a rose dies, beauty does not vanish. We see beauty not only in nature, we see it in people, gestures and situations, and always with a feeling of happiness. On a very simple level her works are meant to act as resting-places, where the spectator is liberated from the ego and the distractions of everyday life. 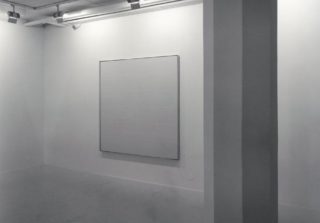