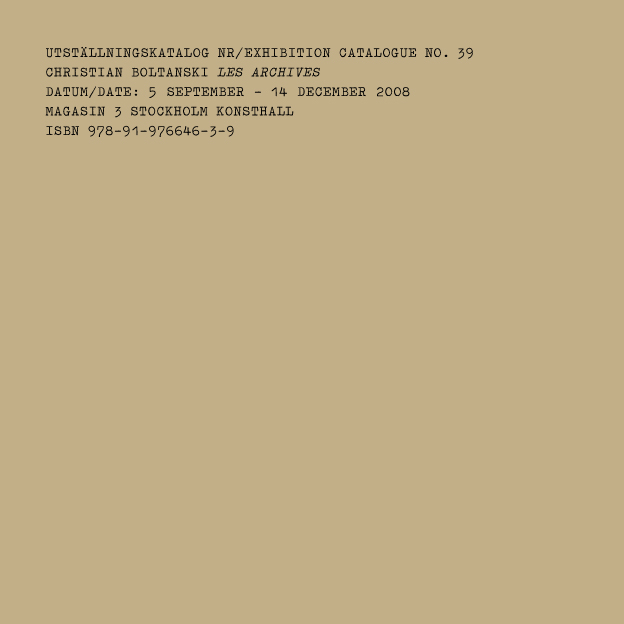 Available for purchase in our museum entrance for 200 SEK (approx. 20 EUR)

During the exhibition Les archives (2008), visitors could record their heartbeat on a CD. The CD was included in the purchase of the catalog, together with a certificate stating that the recorded heartbeat belonged to the buyer.

For every catalog or CD sold, Magasin 3 donated a part of the sales to the Swedish Heart-Lung Foundation’s research on heart, lung, and vascular diseases. During the exhibition, it was also possible to only purchase the CD.

If one were to try to reduce all artistic and human production throughout time to just one simple driving force it would probably be a striving for immortality. The knowledge of our death lies inherently within the nature of birth; no life is eternal or everlasting. However, since life is our greatest gift we do everything possible to try to immortalize ourselves. Throughout history religions as well as philosophers, writers and other intellectuals have been fascinated by the question of how the physical body and the soul can attain immortality. Already in the Epic of Gilgamesh (ca. 2000-1000 BC), which is regarded as one of the world’s first literary works, we find a searching for eternal life. Christianity maintains that Adam and Eve lost their – and all of humanity’s – physical immortality as a consequence of the original sin. This human weakness which brought about the Fall paves the way for Christianity – as well as Islam – to promise eternal life after death to true believers. “Our hope of immortality does not come from any religions, but nearly all religions come from that hope.” Robert Green Ingersoll (American statesman, 1833-1899)

In the time of the pharaohs the Egyptians mummified their dead in the hope that this would enable them to live on in their physical form in the afterlife. Immortality is also a major part of the Rastafarian religion – they are convinced that at the end of life on earth they will be called to the biblical Mount Zion where they will live on freely. Certain Taoists believe that the repeated recitation of certain texts can be rewarded with eternal life while others practice internal alchemy to prolong life and to, in theory, attain immortality. In the secularized Western world people try to prolong their lifespan or even to turn back the clock through methods like extreme diets, exercise routines and surgical or even genetic procedures.

In spite of this, science has proven again and again that for the human body as for all biological forms of life, death is the inescapable end and a part of evolution. The only possibility of ‘eternal life’ in the biological sense is reproduction where genes are transferred from one generation to another. A concrete example of this is the case of Oskar Schindler, the German businessman who saved 1,200 Jews from deportation in Nazi Germany.

In the epilogue to Steven Spielberg’s film Schindler’s List from 1994 we see contemporary documentary footage of some of Schindler’s Jews visiting his grave. The subtitles explain that those saved by him have more than 6,000 descendants. Now, 14 years after the making of the film, it must be considerably more. In the future there will be an infinite number of people who exist only because of Schindler’s bravery. One would gladly stop one’s thoughts here but one is at the same time unavoidably reminded of the potential descendants of the 6 million who were murdered. A loss too great to capture in words.

Another interpretation of immortality is the notion that we exist as long as we are remembered, spoken or written about. As opposed to all the power mongers who through war, murder and devastation have inscribed their names into the history books, artists have found a much more positive and subtle way of immortalizing themselves. If the artist creates work that touches people during his lifetime these pieces are kept and archived for future generations.

“I am interested in what I call ‘little memory’, an emotional memory, an everyday knowledge, the contrary of the Memory with a capital M that is preserved in history books. This little memory, which for me is what makes us unique, is extremely fragile, and it disappears with death. This loss of identity, this equalization in forgetting, is very difficult to accept.” Christian Boltanski (from “The Big Storehouse”, PAJ: A Journal of Performance and Art 21:1, 1999, p. 58-62)

In his work since the 1960s Christian Boltanski has employed the archive as his main artistic form, taking on the task of not only immortalizing himself but even his fellow human beings. The material he uses is everyday objects and personal belongings to remember ordinary people by. The works often resemble depots of found objects and are infused with a sense of loss. However, here it is not the objects themselves that have been lost but their owners who are missing.

“Someone’s photograph, garment or dead body are pretty much the same thing: there was someone there, now they’re gone.” Christian Boltanski (From Centre Pompidou’s Internet archive for education (Education/Media Support).