(…) You have said that it was crucial that you did not conceive this work as a documentary – in this way the work retains a certain ambiguity, even mystery, and the images in the work are like a pause…
Yes, these images create a moment in time to contemplate in silence what you have just heard. The experience of a place or situation is very different if you close your eyes and just listen. The opposition of total sound and a completely silent image is important to me, because in the middle is you, experiencing this cut which opens up possibilities for understanding. The idea is to put you in a position where you are implicated, where you will have an experience that will exceed any of my intentions in making this work.
I remember you mentioned that in Mother’s Day the images were not shot at the time of the sound recording.
For a while I was kind of blinded by the emotional drama of the soundtrack and couldn’t see an image for this work at all. Only a year later I managed to film the clouds at the same location. They resonate with the movement of the voices, but, significantly, they also block the image and create a certain opacity. Then by the end of the piece you clearly see the Shouting Hill while the clouds are swirling in the sky above to the sound of call and recall; it is a moment of release.
Another piece that will be in the exhibition is called 360 degrees. It too is not a documentary film but it is more documentary in character than Mother’s Day.
Oh, for sure. It is a panoramic view of a particular time and place. It was shot on a warm Friday evening in the summer, when people come out to socialise by the sea, between Tel Aviv and the old city of Jaffa. I collaborated on this with Lennaart van Oldenborgh, my partner and technical producer, who was on camera. The 360 degrees panning shot has been used in other artworks of course but for different reasons. Here it is a gaze that moves slowly and lets reality unfold in front of you in real time. It gives a particular view of the social topology of this complex public space. I visited this beach a lot during the time I was working on Lifeguards. There was such a variety of people using this space and I decided to look more closely at this context of apparent coexistence. (…)

What’s in a Voice? by Mladen Dolar

(…) Where does the voice come from? Already the simple question of its emission involves a paradox: we can see the mouth, the bodily opening from which it is supposed to emanate, yet the voice comes from an invisible interior. It indicates an unfathomable interiority; we can never see its source. It divides the body into an inside and an outside, it is itself the major operator of the most dramatic division there is. Being placed at this dividing line that it helps to produce, it is at the same time the intersection of body and language, it is what they have in common, it pins the language to a point of bodily emission, it ties language to the body. The signifier is a creature without a body, a creature of logic, but with the voice it acquires an embodiment, an incarnation, for it can function only if someone assumes it with his or her own voice. The voice is the bearer of meaning, it points towards ideality, it is sense in the making. But at the same time it involves much more: it carries enjoyment, it palpitates with affect, it ties the ideality of meaning to the point of its pulsating bodily emission. But this connection is paradoxical, for the voice doesn’t simply belong to either the body or the language. It cannot be seized by linguistics and it is not a positive part of the body, it is a missile that departs from it, it is not simply inside nor outside, but consists in the very transition. (…)

The Spectral Presence of the Modern Border by Anselm Franke

(…) Mother’s Day is an installation that constructs an aural, visual and spatial environment with its respective immersive effects, a work that truly takes hold of its spectators. Even before we get to see any of its content, its imagery, the work has already invoked a form introduced by Romanticism, the Gesamtkunstwerk – the work of art as a totality, which plays on all registers of experience. I will begin this reflection by taking a look at how the Gesamtkunstwerk as a form is already dealing with the problem of a particular, immaterial border. In its original conception of a synaesthetic totality, it was conceived as an answer to an irrevocable stigma, which characterised art: the stigma of art’s own fictionality, by means of which it is separated from reality. The contested role of the concept of the Gesamtkunstwerk in modern aesthetics revolves around the question whether it, and indeed the entire Romanticist aesthetics from which it is derived, amplifies the problem immanent to this border, or contributes progressively to its resolution. The Gesamtkunstwerk is an answer to, and embodiment of, a conflict of division – it is a machine of transgression. (…) 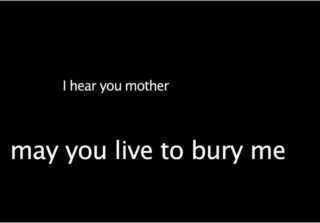