Tom Friedman – Up in the Air 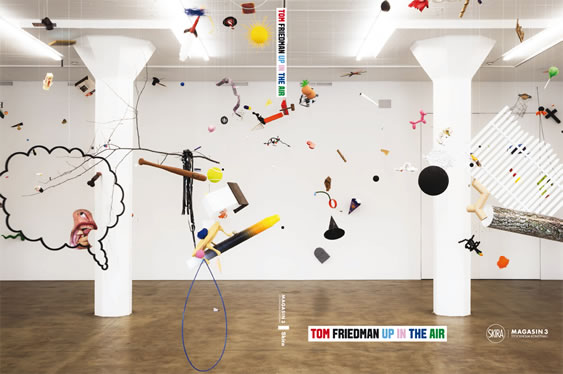 All That is Solid Melts Into Air, essä av Charlotte Eyerman

Friedman asks fundamentally philosophical, and specifically epistemological, questions about how we know what we know, and by extension, how we see what we see or perceive what we see. His aim, in his words, is to ”slow down the process of looking,” precisely because we live in a world of information overload. Perhaps human experience has always accommodated intellectual and sensory overload. Our postmodern world has its own endless military conflicts and various tulipesque manias: the stock market crash of 1988, the dot-com bubble of the mid- and late 1990s, the subprime mortgage crisis (and related, concomitant on-going crises) unleashed in 2008. Now, however, these crises are documented and communicated by a 24-hour news cycle with global and instantaneous reach and seem to be a different animal altogether. (…)

Up in the Air, Tom Friedman’s new work that debuts at Magasin 3 on the occasion of an exhibition by the same name, takes the form of an enormous still life. It is the centerpiece of an exhibition that showcases Friedman’s extremely varied production. Friedman’s oeuvre celebrates diversity of form and materials, and resists easy categorization. He is at once a sculptor, a draughtsman, a painter, a photographer, a participant in ”new media,” and a conceptual artist. His materials tend to be drawn from the mundane and the familiar, and are then transformed by Friedman’s “mad scientist” imagination. He makes works that are dazzling in their technical skill and discipline, while seemingly simple or straightforward. He has a magician’s love for sleight of hand and the trickster’s impulse to remind us that things are not what they seem. Friedman’s works invite questions about what is real, about how we see. They beg questions that are sometimes benign and gentle, and sometimes menacing, and often these notes are struck within the same works. (…) 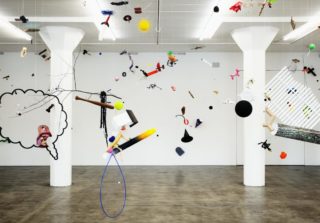